The B-17 bomber Sentimental Journey is parked outside the General Aviation terminal at the Southwest Wyoming Regional Airport Friday. The bomber's stop at the airport is part of a larger summer tour. Star photo by David Martin 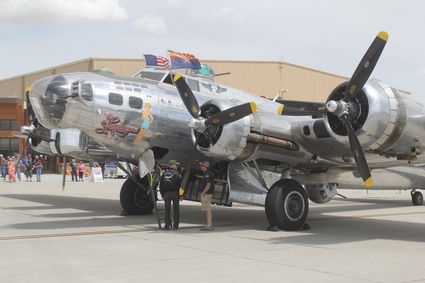 A shining relic from the United States' involvement in World War II was on display at the Southwest Wyoming Regional Airport, conjuring images and memories of a bygone era.

The B-17 Flying Fortress known as Sentimental Journey, an aircraft from the Arizona Commemorative Air Force Museum, made a stop at the airport as part of the museum's summer Flying Legends of Victory Tour. The bomber was designed for unescorted bombing missions over Europe during World War II. The plane is one of eight B-17s still flying.

For many of the residents, the aircraft is a lovingly restored piece of military e...