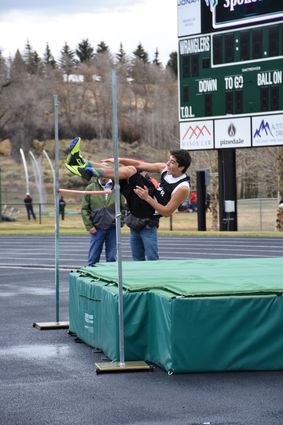 Paxton Castillon clears the bar while competing in the high jump event at a meet in Pinedale.

On Saturday the Wolves traveled South to Morgan, Utah, to compete with five other Wyoming teams and 23 Utah teams.

In the boys 4X800 meter relay, the Wolves took second place with a strong team that finished more than a minute and 10 seconds faster than earlier in the week. In the 3,200-meter, all three runners improved their times significantly led by Greg Sherwin in 26th, Jared Westenskow 5oth and Evin Hansen 52nd in the field of 64 runners.