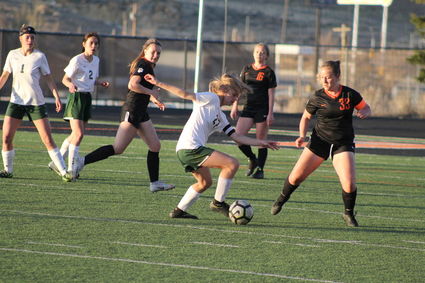 Carly Kettering keeps the ball away from a Lady Tiger during competition in Rock Springs Thursday.

Coming off of a 5-1, win against Star Valley last Tuesday, the Lady Wolves were ready to take on Rock Springs and Evanston.

"Star Valley was a complete game for us," head coach Tracy Wyant said. "I don't know if it was senior night or what."

She said the Lady Wolves played the best game of their season that night and she's hoping to see their performance repeat.

On Thursday, it was a different story though when they challenged their biggest rivals and the No. 1 team in 4A West Division, the Rock Springs Lady Tigers. The Lady Tigers are the team to beat this year and have proven it time and time again because they still remain undefeated with only a couple more regular season games on their schedule.

Despite the high ranking, the Lady Wolves gave it their all against the Lady Tigers, but is wasn't enough and they lost, 6-0, in Rock Springs.

"I don't think our girls play bad at all," Wyant said. "They are just a good club this year."

She said Rock Springs is a tough team to beat because they are fast at everything they do. It's hard for teams to keep up that pace throughout the entire game.

On Friday, after a hard and tough game against Rock Springs the night before, the Lady Wolves traveled to Evanston.

It was a tough one. Wyant said the Lady Wolves were playing in extremely windy conditions and they weren't used to how real grass impacts the movement of the soccer ball.

The grass just slows everything down and the Lady Wolves had to really kick the ball hard to get it to where it needed to go.

Wyant said it took them about half of the game to learn how to adjust to the conditions.

The Lady Wolves ended up winning the game 2-1 in overtime.

The Lady Wolves had tough practices Monday through Wednesday, but will taper off Thursday in preparation for their Friday game against Kelly Walsh, which starts at 6 p.m.

They will not have much time to recover because they will play Natrona County at 8 a.m. Saturday. Both games are in Casper.

"Kelly Walsh will be tough," Wyant said. "Natrona County could go either way."

She said it's all up to how hard the Lady Wolves work to get it.

These two games are the final two in the Lady Wolves' regular season play.