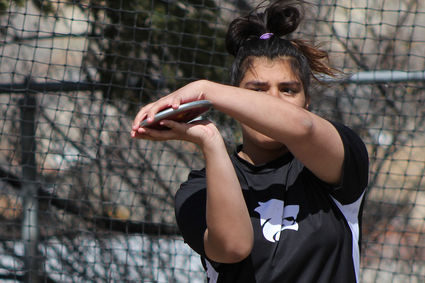 Faith Bartashnick readies herself for a discus attempt while competing in Rock Springs earlier this season. Bartashnick led the Lady Wolves' throwers in the shot put, while the team competed in Afton, taking 11th place.

Green River's group consisted of eight girls and two boys and they competed with 11 other Southwest Wyoming high schools and one Idaho high school for the Dave Draney Invitational Track Meet.

Despite the small numbers, those who traveled during spring break got in some good competition and several recorded their best or close to their best results of the season.