Wolves edged out in Star Valley 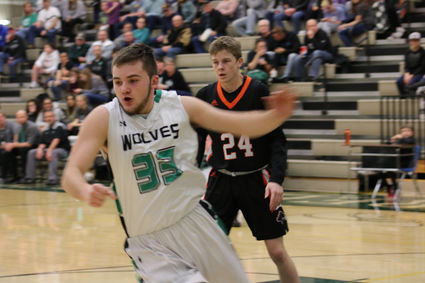 Braxton Yeager gets into position during action against Jackson. The Wolves return to Green River High School Thursday night when they take on the Rock Springs Tigers.

The Green River Wolves are looking to bounce back following a narrow defeat in Star Vally over the weekend.

The boys traveled to Star Valley Saturday, but lost to the Braves 68-65.

The Wolves slip to 1-2 in conference play and 7-6 overall. Slow starts continue to plague the Wolves in their games, with the Wolves finding themselves down 21-13 at the end of the first quarter. Head coach Laurie Ivie believes the problem could cost the team future games if it continues.

"We played a good second half, but cannot continue to have slow starts and win big games," Ivie said.

Another problem that impact the Wolves was a struggle on the defensive side of the game. The Wolves allowed 39 points scored on them at the end of the first half and continued experiencing difficulties at the free-throw line.

"Those were key contributors to the loss," Ivie said. "That is unacceptable."

The Wolves will take on their rivals from Rock Springs Thursday night at home. Like the Wolves, the Rock Springs Tigers have also faced difficulties during the season, having an overall record of 3-9 for the season, earning wins over Laramie, Cheyenne South and Rawlins. Regardless of the record, Ivie is expecting a tough game from the Tigers.

"Rivalry games are always exciting," Ivie said. "The Tigers have struggled early on, but consistently improve each game. I expect them to bring their best to the court on Thursday and I expect the Wolves to do the same."

Following Thursday night's game, the Wolves will take on the Kelly Walsh Trojans Saturday afternoon at GRHS. Varsity action is scheduled to start at 2:30 p.m.