Learning to dance at Wolfpack camp 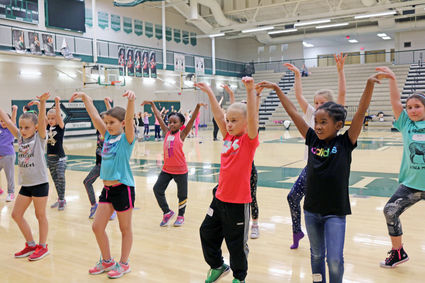 Third-grade participants from left and in the front Hadlee Montimer, Ali Magnuson, Rylee Williams and Kymani Reid work on the routine the dancers were teaching them.

More than 70 children were learning dance moves to a song during the Green River Wolfpack Dance Team's dance camp.

On Saturday two Green River High School gyms were filled with children from preschool through eighth-grade students who were all learning dance moves to the song "It's Party Time" from "Hotel Transylvania 3."

Assistant dance coach Christine Peterson said the older children in grades fifth through eighth were learning a separate dance from the preschool through fourth-grade dancers.

Peterson said the dance camp is a way for the Wolfpack Dance Team to raise money to pay for costumes, a choreographer and travel expenses to and from the state competition. 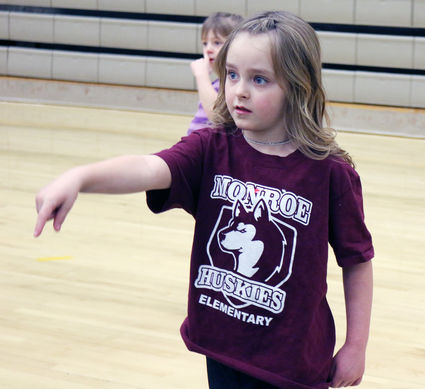 "This is our biggest fundraiser of the year," Peterson said.

Kranz' daughter is 7 years old and seems to enjoy learning the dances. She said her daughter is just too young to be in a regular dance class and on the go all of the time.

This is a way for her daughter to experience the fun of dancing without having to be on a dance team all year.

During the camp, the participants learned how to stretch, a dance routine and new games. Those who attended the dance camp will perform in front of a home crowd during the JV boys game on Saturday at 11:30 a.m.