LEGO mania at the library 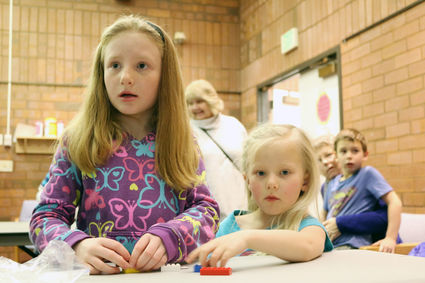 The Sweetwater County Library was bustling with children all there to build things with LEGOs.

During the library’s LEGO Olympics, children could participate in three timed events at a chance to win a prize or they could just build whatever they wanted with the LEGOs provided.

Youth services librarian Becky Iwen said over the years they’ve had many LEGO parties. She said a few years ago they used to have LEGO group that met once a week.

Now, the library tries to host special events, such as this one.

During the first competition, two teams of 20 were asked to recreate a shape with the pieces provided.

Every group received the same amount of pieces to recreate the shape projected onto a screen.

Whoever got the shape done fastest while being correct won a prize, Iwen said. That competition was over in about 30 seconds.

In the second event, the competitors were asked to build a LEGO boat in 5 minutes that would not only float, but hold marbles. The boat that held the most marbles before sinking to the bottom of the plastic pool won. The winning boat held 9 marbles.

During the third and final competition, participants were asked to build a tower where the base was bigger than the top. The tower would have to stand on its own during the judging. The tallest tower standing after the 5 minute building time was over would win.

At the end of the competition, all of the participants received LEGO shaped crayons that library employees made out of LEGO molds and crayons.