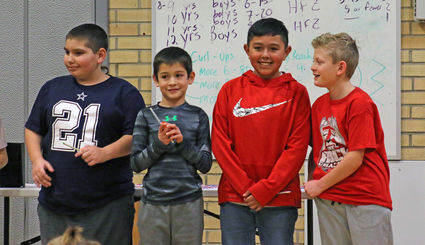 On Friday afternoon, students at Monroe Elementary School were recognized for various accomplishments by their teachers.

During an assembly, students at the school were asked to stand and then come forward in front of their family and friends to receive a small token of appreciation. One third grade class at the school was given applause for being the class to raise the most Box Tops. Box Tops for Education is a program that encourages students, parents and their families to collect Box Tops. These Box Tops are located on all sort of products and are pink and orange.

Each Box Top is worth 10 cents. This doesn't seem like much, but this school raised $600 just for its fall collection. The money is used to help purchase supplies and planners for the school's teachers. 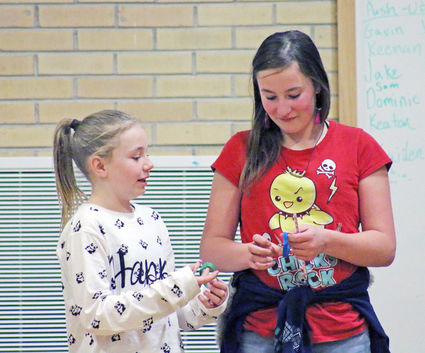 Jacilynn Cornett and Amanda Davis quickly put on the bracelets they received at the ceremony.

Children who had outstanding attendance were asked to stand and receive applause from the audience.

Other students were recognized for one of the three "Husky Way" areas, including being responsible, respectful or safe. Students in kindergarten through fifth grade were nominated by their teachers.

Teachers also gave out awards to those who were named "citizen of the quarter." These students demonstrated all three "Husky Way" areas throughout the quarter.

The awards didn't stop there, as academics were also taken into account. Math and Science, Technology, Engineering and Math awards were also given out to students who were excelling in those areas.

After receiving a pencil, bracket or other small token of appreciation, the students had the chance to give high fives or fist bumps to the Husky mascot.