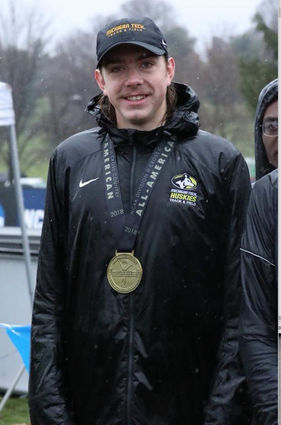 Braden Reichl poses for a photo after being named All-American in the 2018 NCAA Division II National Cross Country Championships.

Braden Reichl, the son of Dawn and Aaron Reichl of Green River and who is a sophomore at the D-2 school Michigan Tech University, recently completed in the 2018 NCAA Division II National Championships.

According to MTU's website, http://www.michigantechhuskies.com, Reichl became the university's first All-American in the men's cross country program. He finished 24 out of 280 competitors with a time of 33:04.1 on the 10K course.

To obtain the honor, Reichl had to battle the elements.

"It wasn't snowing, but it was cold and really muddy," Reichl said. "The conditions weren't the best."

He felt the muddy course might have played to his favor because the competitors were coming from all over the country. He said those who came from Florida or California probably weren't used to running in cold and muddy conditions. Reichl however was used to cold conditions because that is what he had been training in for the past month.

As for the time, Reichl said his time has been better in other races.

He said he knew for this race it wouldn't necessarily be about the time, but where he finished. The top 40 would be named All-American and that's what he wanted to achieve.

"I knew it was a possibility and I had the capability to do it," he said.

Reichl said he was pretty nervous the week leading up to the race, but he tries to suppress the nerves so he can do the best he can.