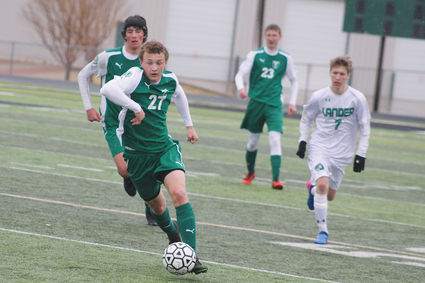 Grant Cobb rushes down the field as the Wolves took on Lander in the semifinals of the Todd Malonek Southwest Invite.

The Green River High School athletic programs produce amazing athletes and teams year in and year out. The 2017-2018 season for high school athletics proved no different.

Under a new head coach, the Wolves played hard, but were unable to reach the playoffs as they had done earlier. Sweetwater County School District No. 2 hired Marty Wrage as the school's head football coach, replacing Don Maggi who previously had resigned from the position. The Wolves overall record was 2-6, but had come close to victory in games against Rawlins, Evanston and Cody. It was t...