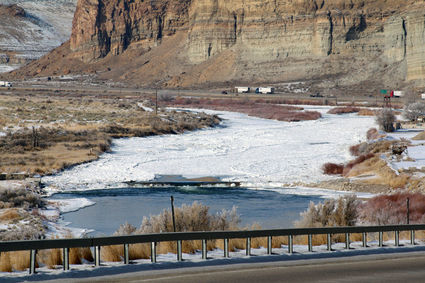 This is the first drop structure that diverts the water into Killdeer Wetlands area. The ice jam appears to start after the structure.

Questions continue to arise regarding the ice jam near Jamestown that's impacting a few Jamestown residents.

Finger pointing and claims that the U-drop diverting water into the Killdeer Wetlands in the Green River is to blame have also started.

Both, representatives from the city of Green River and Sweetwater County have started to look into the issue.

Jamestown residents Todd and Susie Heslep whose home is being threatened because of the jam have been watching the jam closely to see if there are any changes.

"(The) situation is about the same," Todd said Tuesday morning. "We have continued...