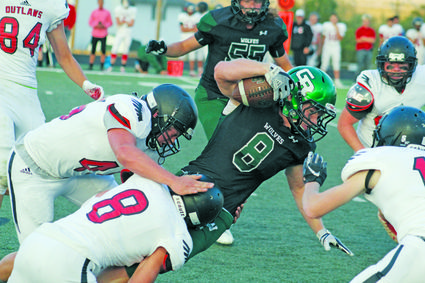 Sophomore James King gets taken down by several Rawlins Outlaws Friday night. The game between the two schools would end 16-14 in favor of the Outlaws, giving the Wolves their first defeat of the season.

The Wolves were hoping to start their season at 2-0 against their second non-conference foe this season, but Rawlins hung on for a close 16-14 victory.

For the second week in a row, both teams have new coaches with Rawlins running a new and difficult to defend Wing-T offense, which is very deceptive with each play looking the same for the first few steps and though Green River was aware of this relatively rare high-school offense it proved to be a tough running game to defend at times.

Wolves received the ball and after Anthony Johnson fell on the ball at the 15-yard line the Wolves went...