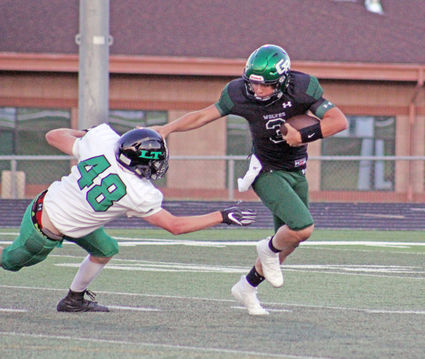 Dallan Serrano pushes a Lander player away during action at Wolves Stadium Friday night. The Wolves defeated the Lander Tigers 31-20 in their season opener.

The weather was perfect, the stands were packed and each team had a brand new coach and some inexperienced players for their first game of the season.

Both teams played hard until the end, with Green River coming away with a hard fought 31-20 victory over the Lander Tigers.

Green River showed some real depth with running back senior Kyle Ivie making a solid return from last year's season-ending knee injury. A host of young backs led by sophomores James King, Gabe Burdettte and junior Tayler Jensen ran well, as did senior quarterback Dallan Serrano, who settled down as the game went on and...