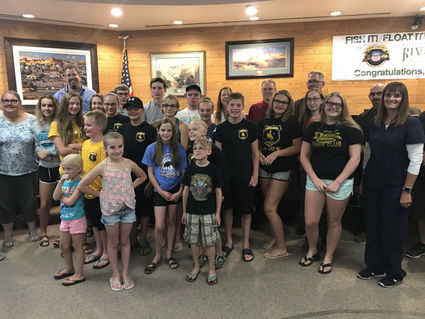 Members of the Sweetwater Aquatics Team stand with the Green River City Council last week after the council members recognized the team's state championship in Gillette. The team is comprised of swimmers from Green River and Rock Springs.

"It was a great feeling," Robbie Lee, president of the Sweetwater Aquatics Team said.

The team, competing at the state USA Swim meet in Gillette July 20-22, took the state title, marking the first time in about 20 years a team outside of Gillette has done so, according to swimming coach Randy Walker.

The team, known as SWAT, is the unification of the Rock Springs and Green River teams.

Walker said the unification was done to help swimmers throughout the county compete better against other teams in Wyoming. This isn't the first state championship the team has earned; it won the state winter championship meet earlier this year.

"It's a major accomplishment for our club," Walker said. "We're just very proud of them."

The competition also resulted in SWAT breaking a state record.

Walker said the 200 medley relay record in the girls 13-14 division. Members of the team were Abi Robinson-Kim, Lilly Munoz, Lauren Lee and Hailey Uhrig. Lee said the winter championships were close, with the team not knowing they would be winning the state title until the final seven races of the meet.

This time however, Lee said the team was sure they would come out on top after the end of the second day.