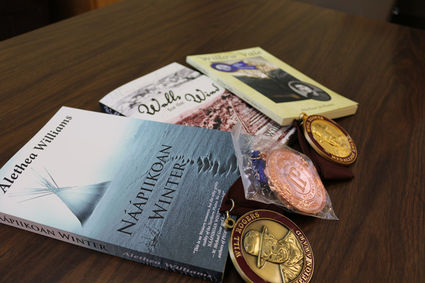 A Green River author who was once again recognized for her writing was delighted by the news of her award.

Christine Alethea Williams, who's pen name is Alethea Williams, the author of "Nààpiikoan Winter" recently received third place from the Will Rogers Medallion Award Committee in the inspirational fiction category. She also received a bronze from the Independent Publisher Book awards in the Best Regional E-Book, fiction category. This book was also a finalist in the Laramie Awards and Goethe Awards.

This isn't the first time Williams has received an award for a book she wrote. Williams also received awards for her book "Walls for the Wind." She was given first place in prairie fiction from the Laramie Awards, was a gold level winner for the Will Rodger Medallion, was a Willa Literary Awards finalist and was MPIBA Reading the West Award nominee.

All of William's books are historical books. "Nààpiikoan Winter" is about woman who is kidnapped by the Apaches. She is then stolen by the Utes, where she is then sold and traded until she ends up with the Pikkàni. All this woman has left are her skills and her honor.

Williams said the book is set in a time where there is a lot of conflict going on.

"I said whatever you want to do. It's your contest," Williams said.

She said she wasn't about to argue with the people who were hosting the contest. Williams said the Will Rogers competition continues to increase in competitiveness. She said big names like Craig Johnson and Jane Kirkpatrick enter the contest.

Williams passion for English, turned into writing after she retired.

"You can't be retired and have nothing to do," Williams said.

Even though Williams has won awards, that's not why she writes. She said it isn't a money making proposition either. She does it because it keeps her mind active and it's something she's always wanted to do.

"I always wanted to be the A student," she said.

For her books, Williams spends hours upon hours researching almost every historic detail she can to make sure everything is accurate. She said she hasn't had any comments about historical inaccuracies in her books, but she knows of others who were patronized on social media by others who found inaccuracies in their books. She said some of those authors have decided to stop writing because of it.

"You've got history buffs that will call you on it," Williams said. "You end up looking stupid and like you didn't do your homework."

Even with all of her research, there are times when all Williams can do is make her best guess. Usually, the issue is clarified later when Williams stumbles onto the answer while looking for something else. She said sometimes during her research she will come across conflicting information on one topic. For example: one time during her research of historical documents she had three different dates for the same event.

One thing Williams said people must keep in mind when writing historical books is historical figures didn't think the way one does today. They were brought up in a different time and under different circumstances.

Even though Williams is still receiving awards on her last book, she already has her fourth book written and its at the editors for review; and she's about 20,000 words into her fifth book. Her fourth and fifth books will go along with the book "Walls for the Winds," which was based on an Irish blessing. Williams books are available on Amazon.com