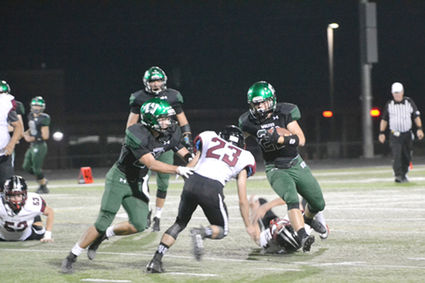 Chance Hofer runs for some extra yards while Devin Love gears up to block for him.

The Green River Wolves took on Riverton and played their first game in front of a large home crowd at Wolves Stadium, ending the GRHS Hall of Fame game with a dominating 56-21 victory.

This time, the Wolves faced a stronger opponent in the Wolverines, but the team were no match for the Wolves as Green River dominated on offense and defense from the opening kick.

The team had two goals going into the game, according to head coach Don Maggi. One was to win the game and get better each week. Maggi was pleased with accomplishing the first goal with a convincing win and felt that they did get a...