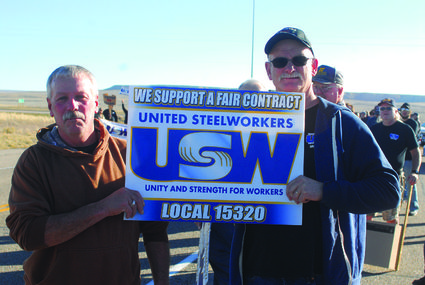 Approximately 70 union members and their supporters gathered near the intersection of Wyo. Highway 374 and Allied Chemical Road, leading to the Tata Chemicals facility. The people weren't striking or protesting, hosting a rally to show their support for a fair contact.

According to one of the union members, Brett Hood, provisions in the new contract Tata Chemicals wants workers to sign would increase insurance deductibles to $12,000 for the company's family insurance plan.

"We're not asking for the moon here," Augie Gardea, a 42-year employee and union member, said.

Gardea said union members understand insurance premiums are scheduled to increase, but believe the workers have undergone enough cuts to keep them lower. He said previous contacts signed by the company and the union have sacrificed wage increases and buses to keep insurance premiums lower.

Union supporters and their families started hosting rallies at the Mining Memorial Park earlier this week and started rallying at the road leading to the company starting Wednesday.

Another rally is planned to start Friday at 7 a.m. near the intersection of Highway 374 and the Allied Chemical Road and is set to take place all day. The union's contract with Tata Chemicals will end Nov. 15. Negotiations continue to take place between union and company representatives.