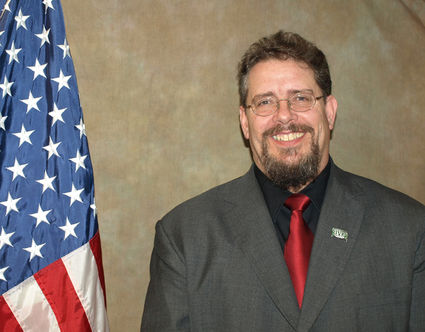 Green River City Councilman Ted Barney's life-changing, mind-opening experience happened many years ago when he made the decision to go on a high school trip to Paris and London.

"It was the best decision I ever made in my life," he said. "It opened my eyes to a great big world. It brought me out of the box of Sweetwater County."

Barney pays close attention to what is going on around the world; and that is a big reason he is running for county commissioner.

Barney is a Green River resident who has worked as an investigator in the public defenders' office for 16 years and is in the middle of his term as a city councilman. If Barney is voted in as a commissioner, he will have to give up his seat on the city council. By representing Sweetwater County, he still represents the residents of Green River, he said.

"There's things going on in the world that will effect our county severely," he said.

One of the biggest things he said will effect the county is the price of petroleum products world-wide and the boom-and-bust nature of the county's economy.

Barney's goal as a commissioner is to diversify the economy of Sweetwater County.

"I hope one of these days, we won't have to worry about a boom-and-bust society and not have to rely on the cycle," Barney said.

A couple of Barney's ideas of economic diversification is to capitalize more on the area's natural resources.

"We have every ingredient here in Sweetwater County to manufacture glass," Barney said.

The manufacturing process would be much cheaper because the county already has the natural ingredients needed to make the final product.

"We don't have to ship the raw ingredients to manufacture it," he said.

Barney said the cost would be cut tremendously, and the potential would be there to sell the product to others at a lower cost because it costs less to manufacture.

Another area Barney suggests the county putting more stock into, is lithium. He believes lithium deposits within the county are for now mostly untapped revenue.

Barney noted ExxonMobil's recent decision to increase its renewable energy usage from 3 percent to 20 percent. Other large-scale companies are doing the same, he said. With the rise in renewable energy use nationally, Wyoming has the natural materials to manufacture renewable energy products such as solar panels for the collection of solar energy.

"World-wide companies are increasing their footprint on renewable energy. We also have the ingredients here to become a forefront in following that footstep," Barney said.

"Once you start seeing things happen world-wide, you have to look and say 'how is this going to effect this county not just today, but a decade from now, 20 years from now, and what do we have to start doing to intervene to make sure we have a viable economy.'"

By diversifying the county's economy, Barney said it will also be easier to keep water in Sweetwater County.

"Our argument right now is, 'no you can't have it,' but if we have a very concrete, active plan for economic diversification bringing industry in here that will need that water, then we need it."

Barney said if the water is allowed to be taken now without planning for the future, the depletion of water rights will hamper not only the county but the entire state of Wyoming as well.

"I love this county," Barney said. "I want what's best for the community."

"It's not relying on 'this is what we've done in the past,' it's 'what do we have to do in the future,' because we have to start now," Barney said. "I have two more years on the city council, but if I wait two more years for somebody to start really actively pushing these things, will we be too late?"