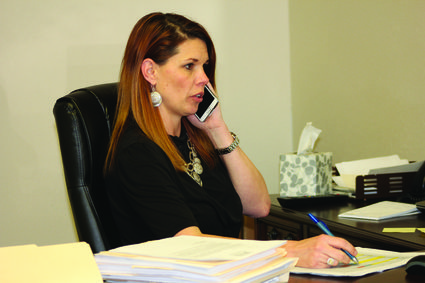 Miranda Burrett, sales manager at Guild Mortgage Company at 541 E. Flaming Gorge Way is available when the customer is available, she said. Customers can also reach her on her cell phone.

A Guild Mortgage Company branch opened up its doors at 541 E. Flaming Gorge Way with a ribbon cutting March 29.

Green River resident Miranda Barrett decided to open up the branch location in Green River after she was asked by Guild if she would like to head a branch location in the area. She'd been working with Guild for about a year before then, only on the banking side of operations. Before starting with Guild in last November, she'd worked at a local bank, working with mortgage companies on loans. Through that time, she built a positive work relationship with the company. Barrett has been in the mortgage industry for 16 years and has worked in all areas of the industry, and now has her own branch of Guild Mortgage Company.

When Guild approached Barrett about opening a branch in the area, they let her decide where the branch should be located. She decided to locate the business in Green River because it is an under served community, she said. The next closest Guild branch is located in Jackson.

"Working with Guild in my previous position, I saw Guild's commitment to the customer, and without the customer no finance business is successful," she said. "I had a relationship with several different lenders and Guild really was the only one that went above and beyond."

When working with Guild previously from the outside, she said they were very cooperative to work with. She said the document drawer would often stay late if they needed to. She could discuss aspects of her loan files with an actual mortgage worker, instead of a customer-service representative.

"Guild's commitment to the customer is what drew me to Guild," she said. "And the fact that I work for a direct loan servicer, so the relationship that I build with my customer continues even after the closing date."

"You will not get that from anyone else," she said. "If you work with another mortgage broker, they're a third party entity that will no longer know because they're done with you."

Barrett said Guild also has service level guarantees, which means they will close on time, every time, she said. If not, she said it is Guild's fault and they will pay the customer up to $500 in fees, though restrictions do apply.

For a company with 250 branches, that money would add up to quite a sum if they didn't close on time every time. The company was founded in 1960. Since their founding, the company has offered a more expansive loan service to open up the home-owning opportunity to more people within the community.

"Being a part of the community is a big piece of that," Barrett said.

Each year, Guild rewards branches with the most volunteering time, by donating money to a nonprofit charity of the employee's choosing. Green River's Guild branch staff already plans to volunteer their time for the city's upcoming Earth Day Fair, and will also sponsor Green River's 2016 River Festival.

"I want to work for a lender that really cares about those aspects," Barrett said.