Green River, Wyoming and the boom 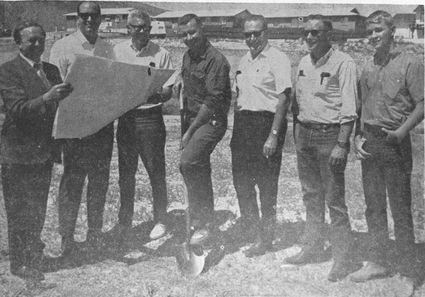 A group of men conducting a ground breaking ceremony at what would become the Hutton Heights Shopping Center, which currently houses businesses such as Arnold Chiropractic and Family Dollar. The image was originally printed in the July 24, 1969 edition of the Green River Star.

While many look back at the economic boom occurring in Sweetwater County throughout the 1970s through the lens of Dan Rather's report on Rock Springs during a segment on "60 Minutes" or though hazy recollections involving wild times, one thing people don't often recall is how the boom left a lasting mark on Green River.

An interview stored in the Sweetwater County Historical Museum's collection of oral histories sheds a little light on how Green River was impacted by the boom. The interview, taking place June 14, 1991 between former museum director Ruth Lauritzen and former Green River Councilman David Brander reveals some of the basic difficulties the economic boom created for the town. Brander served on the council from 1968 to 1980.

"In the very beginning, it was a small town," he said. "We had two police officers and we had one garbage collector and we had a street supervisor that did everything ... we just basically had four or five people working for us and we needed about 300."

One of the biggest changes Green River underwent during that time, was changing its designation from a town to a city. Brander said there were a number of benefits Green River received, including some financial assistance from the state and federal governments, but admits the change created "a tremendous federal bureaucracy" for the city. Brander himself disagreed with the move, even in 1991, saying he thought Green River should have remained a town.

"Wyoming isn't in tune to bureaucracy. We're not one of those states that appreciate that," he said. "And I wish we hadn't (become a city.)"

As one could assume, employees were one of the biggest problems the city had at the time. Brander said the city didn't have employees to do anything, resulting in the city contracting a lot of work out, including inspectors, planners and architects.

"We had to rely heavily on contractors, which is dumb, of course," he said.

Brander did say some of the contractors the city dealt with were excellent, while others provided less than desirable service. Brander said the city could depend on some trades, while not others. One of the trades that provided hit-or-miss work were concrete workers, whom Brander said would either do an excellent job with their job or they did not.

Brander said the city didn't face financial hardships where people were coming in faster than the money and the city utilized general obligation bonds to keep up with the construction. Brander said Sweetwater County School District No. 2 used a similar tactic in building the five schools constructed between 1970 and 1980, which were Green River High School (now Lincoln Middle School), Harrison, Jackson, Truman and Washington elementary schools.

The influx of workers and people moving to Green River was largely a result of the trona and coal mines. This also created a problem for the city in that they would have to compete with the mines for workers. This, as in the case with Rock Springs, also resulted in the city "inhabited by bars and bar flies," as Laurtizen described it -- which was something Green River was able to avoid. Brander said the city council worked at helping Green River avoid many of the troubles that were impacting Rock Springs. The council solicited professional opinions on how they should develop the town and created a basic city plan on what the wanted to see the city become.

"And we decided at that time that we basically had the climate in downtown that we wanted. Let's leave downtown alone, let's not try to move the bars into the community, let's leave them where they are," Brander said. "If we are going to develop the town, let's develop it as a residential area, try and develop some commercial and industrial base."

Brander did say, looking back on the time, that they started with the commercial base before the residential planning, saying that because the city is residential, it's difficult to bring commercial and industrial companies into the city now. Discussing the changed growth patterns between Green River and Rock Springs, Brander said Rock Springs has led the county politically and while Green River does attempt to do different things, the city politically slipped at some point and changed the growth of both cities.

"And of course there was a little stronger element in Rock Springs that were more inclined to use force if they felt like it," Brander said. "And that I'm sure helped them politically."

Green River's saving grace, according to Brander, was the fact it established itself as the county seat to keep the political base in Green River.

"But that's about the only thing that stayed here," he said.