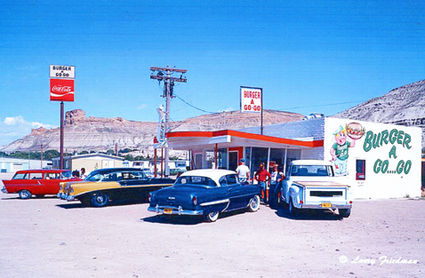 The mere mention of the business' name will cause a few residents to start drooling.

The business was known around the town for its maxi burger, also known as the hubcap.

Stephen Barrera, son of Faye Bussart who owned Burger A Go Go, said his mother special ordered the buns for the maxi burger from a bakery in Colorado. The buns, which were 8 1/2 inches around, were delivered every couple of days to meet the demand.

Barrera said his mother opened the business in the early 70s. Prior to it becoming Burger A Go Go, the business operated as a Tastee Freez drive in. It was located at the east end of Green River, across from the railroad; and remained there until the early 90s. According to Barrera, the location was the best spot in town. Those businesses, including Kentucky Fried Chicken, Burger A Go Go and a truck stop, were the first thing people saw when they drove into town.

"They made her close it because the highway department was building the loop for the overpass," Barrera said.

Bussart hated to close that place; and looked all over Sweetwater County for a new location to open another Burger A Go Go, but she had no luck, Barrera said. She later moved to Laramie where she opened The Fabulous Fifties; and she remained in Laramie until she passed away.

Burger A Go Go, although very popular was not the only business Bussart owned. Throughout her years in Green River she owned The Brigg, The 49er, Yum Yums; and in Rock Springs she owned the Peppermint Lounge and another Burger A Go Go.

What made the business so special was the food.

"Everything she made was homemade," Barrera said.

Real milk, syrup and soft-serve ice cream were used in the chocolate, cherry, vanilla, marshmallow, peanut butter shakes. These were a few of the most popular flavors. They were also known for their banana splits and sundaes. Barrera said she never used peanuts because anybody could use those and she wanted her customers to feel special. She either used pecans or walnuts, Barrera was not sure which.

"All the food she served was fifties style," Barrera said.

Barrera can recall peeling hundreds and hundreds of potatoes and then manually cutting them by hand with a French-fry hand cutting press. Not only was the food good, but so was the service.

"It was quite the little hang out," he said. "A lot of high-school girls worked for her."

Another popular item was the pronto pup, which was a corn dog, he explained.

"My mom always had to be different," he said.

"She was the only place around that had English chips," Barrera said.

As for the burgers, people still crave them today.

The maxi burger, the hubcap, had all of the fixings, including lettuce, tomato, onion pickles, cheese, ketchup and mustard. The massive burger filled the entire 8 1/2 inch bun. When the burger arrived it was already cut in half so the customer could eat it easily.

Many residents would split the burger and fries and still walk away stuffed, however, if one patty wasn't enough one could always get two.

The mini maxi burger also had all of the fixings that the maxi burger did, but it was smaller. Those wanting something lighter to eat could always get the mini burger, which was a single patty with all the fixings. If a customer wanted two patties without the cheese, then they would order the midi.

Another popular item was steak fries, which is as it sounds. Cubed steak was cut up in fry-sized slices that were battered and deep fried. They were served with a special sauce Barrera's mother made from scratch.

Barrera said when he mom first opened she wanted to grab the attention of the town, so she advertised six mini burgers for $1.

"Oh my gosh. People went crazy over it," Barrera said.

Not only was Bussart known for her business, but for her generosity. Barrera said he could not count how many times she allowed railroad jumpers to have a free meal. He still recalls her telling the car hops to give those people whatever they asked for.

The railroad jumpers were not the only people she helped, Barrera said she was also known for helping people traveling through Green River who had come upon hard times. She would give them a free meal as well.

The building was a drive-in place.

"It was an old drive-in style, you could not eat inside," Barrera said.

This limited the business to seasonal hours, but Bussart would open as soon as she could and stayed open as late in the season as possible to accommodate the residents.

Once a vehicle pulled up, a car hop would come out and take their order.

The car hop would place a tray onto the window of the car and then the food was placed on the tray. The car hops wore money belts so they could make change at the cars.

Barrera said his mother loved to shock the town. One time, she decided to advertise topless car hops. The girls wore headpieces that made them look bald, or topless.

"It caused an uproar," Barrera said.

Although the building is gone, the memories for those who went there are alive and strong; and most will never forget the business or the food even though it closed in the early 90s.