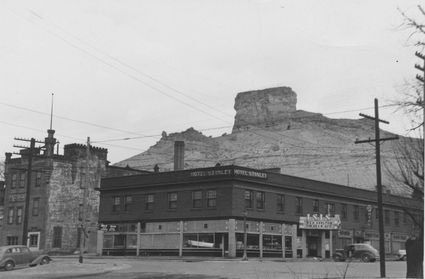 The Isis Theater was a popular place for residents to watch new movies. Below, The Morris Mercantile was built in 1891; and remained an important part of the community until it burned down in 1917.

Theater, hotel open after The Morris Mercantile burns down.

Interim Sweetwater County Museum director Brigida Blasi said the Morris Mercantile was built in 1891 owned by Edward J. Morris. He was the son of Esther Hobart Morris, who was known in the community as the first female Justice of the Peace in South Pass City. Edward Morris was the first Green River mayor and a member of the constitutional convention to make Wyoming a state.

According the an article in The Green River Star's Jan. 6, 1911 edition, "The largest and most complete stock in the general merchandise line is to be found at the Morris Mercantile Co. of this city. This firm is widely known for the excellent lines of good it carries in its various departments. Here one can find everything in the live of dry goods, groceries, hardware and household furniture. A corps of courteous and capable clerks are always ready to wit upon your wants in a satisfactory manner. They take pleasure in displaying their stock, feeling confident that when one has carefully examined the same and learning the prices, that they cannot do better elsewhere."

Blasi said the Morris Mercantile remained an important business up until it burned down in 1917.

According to an article in The Green River Star's March 30, 1917 edition called "Morris Block Destroyed by Sunday Night Fire," the town awoke to the shrieks of the fire whistle as it was on its way to the Morris building." The article states that wind added to the danger of the fire and at some point it was believed "the entire east part of the town was doomed."

Blasi said construction on the Stanley Hotel and Isis Theater began in 1919; and the hotel and theater opened in 1921. Not only did the hotel house a theater, but it had room on its ground floor for three other small businesses. The building, which is located downtown, near Flaming Gorge Way is currently vacant, but one can still tell it was a theater since the marque remains.

The Isis Theater remained open until the Star Twin opening on Uinta Drive.

Green River resident Richard Watson can still recall the Isis Theater. Although it was nothing special in his mind, it was a place to watch movies. In 1947, Watson would occasionally go to the movies.

A Sunday and Monday movies were usually first-run movies such as "Gone With the Wind" and "Casablanca." Wednesday and Thursday were fill-in movies and Friday and Saturday were western movies, Watson said. 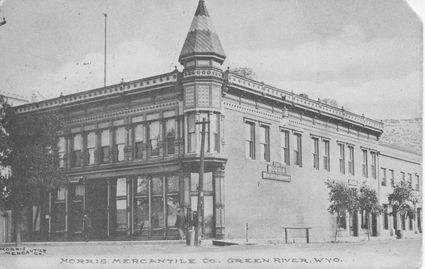 Watson remembered what the cowboy movies were like back then. He said that is when the cowboys would shoot 12 shots when the gun only had enough for six. He said those same types of movies always had the hero cowboy wearing a white hat that no matter how fast he rode the horse or how big of a fight he was in, it never fell off.

Watson said one thing he could recall is the whole family went to the movie during those times, that included the babies too. He could recall mom's having to visit the designated cry room during the movies while the baby cried and then coming back when they had calmed down. During this time, Watson also noticed most of the movie theaters seemed to have Egyptian names for some reason or other.