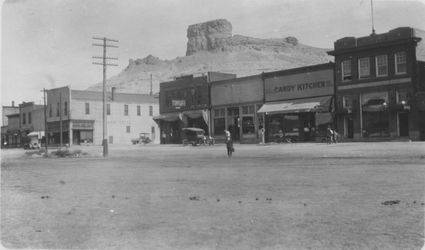 Over the years, this building has changed ownership, but managed to remain a bar even during prohibition. During prohibition, it was renamed a Candy Kitchen and served as such, however, there was a speakeasy in the back room.

Over the years, this business changed owners and names, but it always acted as bar, even illegally during prohibition.

According to historical documents from the Sweetwater County Historical Museum, prominent businessmen, Joe Payne and George Spinner owned the building in the 1800s.

The first known business was called the U.P. Saloon.

An advertisement for the U.P. Saloon appeared in a Green River Star's 1891 proclaiming L Henkle as the proprietor. The ad stated "Don't stop for orders or broken rails, but run into the above terminus where you will find a full stock of choice cigars, wines and liquors. To supply the tired and thirsty public. Opposite Depot."

Former museum society member Jim June said the saloon became known locally as the "bucket of blood," and "it more than lived up to its name."

In the 1890s, ownership continued to change as well-known businessmen, such as John Gilligan, Karl Spinner and T.S. Taliaferro Jr., owned the establishment at some point. In 1900, the Christmas family purchased the property and in 1904 the saloon became known as The Senate Saloon or The Senate for short.

A Feb. 2, 1906, Green River Star advertisement about The Senate stated it was the "finest equipped place in town;" and carried a fine line of wines, liquors and cigars. It also stated it had a "first-class lunch counter in connection" and a "regulation pool table." This was just one of many ads proprietor Charles Young placed in the Green River Star.

One of The Senate Saloon's last ads, which was in the May 5, 1918, Green River Star stated the facility had "cold beer always on tap."

That is until the Volstead Act of 1919, which marked the beginning of prohibition. According to the Green River Star article called "Nation Dry Only After Long Fight," in the Jan. 31, 1919, edition, "With the swiftness that has surprised even the most optimistic of prohibition advocates the United States has voted itself dry. It has done this by voting into the federal constitution an amendment that prohibits the manufacture, sale or transportation of intoxicating liquors within the United States for beverage purposes, as well as its importation into or expiration from the United States and all territories subject to its jurisdiction."

Saloons across the country were forced to either change their business of go out of business.

According to Sweetwater County Historical Museum documents, The Senate Saloon became the Candy Kitchen. It had a soda fountain, an extensive stack of ice cream, candy, toys, stationary, books, cigars, tobaccos, cigarette holders and pipes. However, it also housed a  speakeasy that operated in a back room of the Candy Kitchen.

Following the repeal of prohibition in 1933, the business reopened as a bar, operating under its current name the Green Gander Bar.