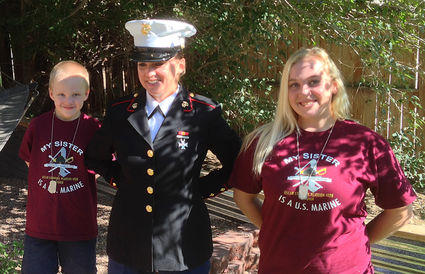 Brandy Stover takes time to pose for a quick photo with her family during her return visit from bootcamp.

Shortly after graduating, Stover was scheduled to start a 13-week boot camp May 27 at the Marine Corps Recruit Depot in Parris Island, S.C.

When Stover arrived in South Carolina, she didn't know what to expect.

As she rode the bus to the depot, she was a little nervous. It was about 1:30 a.m. when the bus Stover was riding pulled in front of the depot. It was dark and hard to see.

Stover said all she could remember was getting off the bus and being told to stand on one of the sets of yellow footprints.

Marine Corps Sgt. Jason Raths said the yellow footprints are a representation of how the person standing on them will be transformed from a civilian into a marine over the next 13 weeks,

"It was really busy," Stover said. "It was a lot of stuff at once."

During the first couple of days, Stover said they didn't really do much.

"You're basically getting yelled at for everything," Stover said.

She said they were put in classrooms and told to stay there. Stover said they were left in the classroom alone for hours. Anytime someone got up or started talking one of the drill instructors would seem to magically appear and yell at them.

During forming days, recruits underwent the necessary preparations to go into basic training. One area Stover felt she already had sufficient training in was marching. Stover was in the GRHS band and was used to marching already. She excelled, while others struggled.

When basic training started, other recruits started to struggle or continued to struggle, but Stover did not.

"A lot were just not physically fit," she said.

The recruits would only receive about six hours of sleep a night, which for some was just not enough. Stover said she did have problems with only getting that much sleep, but she tried not to let it defeat her.

However, during the first week, Stover had a mild incident. After being woke up at about 4:30 in the morning she was in such a hurry outside that she ran right into a fire hydrant. After that she was not only know for being quiet, but for being clumsy.

Stover said it is hard to remember everything they learned in the 13-week training because it was so much information in a such a short period of time. She did recall hiking a lot and a lot of physical exercise.

"I thought it was fun," she said. "A lot of people had a harder time."

Stover's class started with 63 recruits, with 43 making it through.

Even though Stover was enjoying her time in training, she did have to overcome some pain. Due to all the hiking and marching, she and the other recruits had a lot of blisters on their feet.

"There were blisters inside of blisters," Stover said. "It was gross."

During their hiking exercises, the women recruits had to carry 20-pound packs. Stover said it had all the gear they needed, including socks, change of clothes and food.

For the final hike, they had to carry 35-pound packs. In these packs were extra camouflage clothes, a mat to sleep on, foot-care kit, sweat pants and extra socks.

Stover said they really needed the extra clothes because it rained during their entire crucible, which is a recruit's final challenge. Crucibles last 54 hours and are designed to challenge the recruits' physical, mental and moral training. It is a way to test them on all the training they received during the previous weeks. Some recruits didn't make it through.

Stover said the 13-14 women on her team struggled.

Stover said she thought the women at the training camp would be different, but there was still a lot of girl drama.

"That's why all my friends are guys," she said.

She said some of the women in her unit would just not listen.

"They didn't know how to stop talking," she said.

Another area Stover excelled in was shooting, which is something she has done since she was a little girl.

"I've always been a perfect shot," she said.

During one of the tests, Stover had one minute to fire 10 rounds at a target. If someone hit all 10 rounds in the black area it was called a possible. Stover was able to accomplish this and was rewarded for it. Her reward was a two-minute phone call to family. It doesn't sound like much, but to Stover it meant a lot.

Sgt. Raths said she was one of the top 10 in everything she completed.

"She's a good example of the success women can have in the military," Raths said.

Not only did Stover's confidence level improve, but so did her communication skills. Stover was quite shy and quiet during her first interview prior to boot camp, but after she was talkative and excited about her future.

Raths said they will learn about explosives, how to throw grenades and how to shoot all of the military weapons, including a machine gun.

Stover referred to her next training as "All that fun stuff."

After Stover completes her combat training she will attend military school and pick a Military Occupation Specialty. Stover wants to go into the field of legal aid and administrative options. Once she finishes her schooling, she can become a paralegal or help with administrative orders.