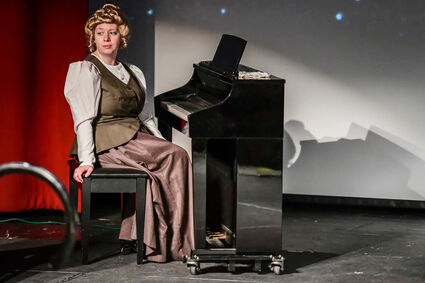 I can't remember what my first play was, because I've been going to plays for as long as I can remember.

Probably one of my earliest memories of going to a play was when my Grandma Middlemas took me to see Roger and Hammerstein's "Cinderella." I don't even remember where the play was performed, just how much fun I had. I grew up going to local productions, mostly at the high schools and college, and traveling to Salt Lake City for plays.

While I consider myself a proud theater nerd, I've never been very actively involved. I've dabbled, at best. My only acting experience came from church productions and two summers of the Sweetwater BOCES Summer Theater for Youth program at Western. As much as I enjoyed being a Mama/Russian Soldier in "Fiddler on the Roof Jr.," even being an ensemble member was nerve-wracking and difficult.

In college, I took some theater-adjacent classes like History of Musical Theater and Playwriting. I auditioned for plays a handful of times without being cast, and decided writing scripts was probably the most involved I would get.

Since venturing into the world of journalism, my closest connection to theater has been covering local plays, which is my favorite type of story to write. I love going to rehearsals to interview directors and take photos of the actors. This has given me the chance to get to know many of the incredible people actively involved with theater in our community.

But I still never imagined I'd be involved myself, so when I was asked to audition for an upcoming Actors' Mission play, I initially laughed it off. Then I found out the upcoming play was going to be "Silent Sky." Out of curiosity I looked up the story and was instantly intrigued, so I read through a copy of the whole script.

Somehow I knew that even though I didn't particularly want to audition, I had to. It was one of those moments where you just know something is supposed to happen. I didn't know if I would be cast, but I had to try, because I felt that I was supposed to be part of sharing this story. That may sound corny - it sounded corny to me at the time - but I couldn't deny that I felt it.

So I auditioned, and was cast, and will be taking the stage this week as Margaret Leavitt.

I'm personally drawn to this play on a number of levels.

First, I love it as a writer and aspiring playwright. The script is genuinely well-written. The dialogue is fast-paced and clever and does a good job giving information without being too expository. The scenes balance drama and humor as they develop the characters and the story. And the writing stays close enough to period-appropriate to feel like the early 1900s while staying modern enough to be relatable and engaging.

I'm also drawn to the story itself as a woman who loves celebrating the stories of strong women. The story of Henrietta Leavitt is inspiring, especially since she made such significant contributions to astronomy and I'd never even heard her name. She persevered through limitations, prejudice, and being overshadowed, but remained dedicated to her passion. I love having the chance to be part of a play written by a woman, directed by a woman, starring primarily women, celebrating the life and work of a remarkable woman.

I knew it would take a lot to ever get me on a stage, and while I still plan to stay in the audience or behind the pen for most of my theater involvement in the future, I'm so grateful to have the opportunity to be a part of the theater world that I love in a more direct way in order to help share this beautiful story.