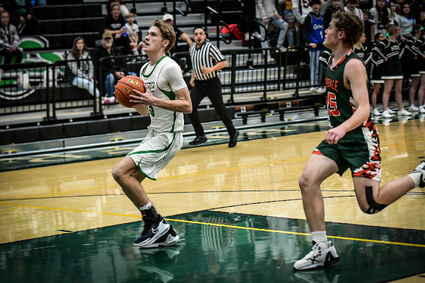 Chris Wilson gets ready to take a shot.

The Green River Wolves Boys basketball team played in another tournament the weekend of January 5 through January 7.

On Thursday, January 5, the boys played Laramie. The top scorers were Xander Lindsey and Theron Archibald with 11 points each, Hunter Lake with with 10 points and Kason Ivie with nine points. Kason Ivie led the team with eight rebounds and Caleb Lake had seven assists.

The Wolves worked great together as a team but couldn't take the lead from Laramie and ended the game with a loss. The final score was 75-56.

On Friday, January 6, the Wolves played Cheyenne South. The top...