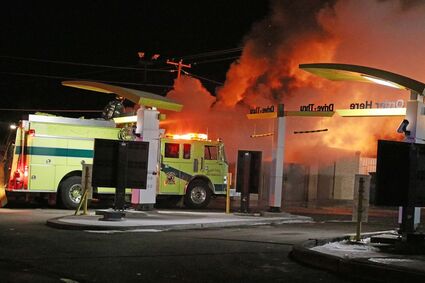 The Green River Fire Department and other emergency services responded to an explosion behind McDonald's in Green River the night of Dec. 29.

The Green River Fire Department, Sweetwater County Sheriff's Office, and other local law enforcement and first responder agencies have responded to several emergencies over the last two weeks, including two fires at mobile homes in Green River and a plane that slid on the runway when landing at the airport.

At approximately midnight the evening of December 29, Green River Fire Department, Castle Rock Ambulance and Green River Police Department were dispatched to a reported explosion behind the area of McDonald's in Green River according to a GRFD press release.

Upon arrival, first responders found a mobile home that had exploded and was fully engulfed in flames. They found one occupant out front that had suffered multiple life-threatening injuries as a result of being inside the home during the explosion. The patient was quickly loaded into an ambulance by GRPD and Castle Rock Ambulance, then transported to Memorial Hospital of Sweetwater County in Rock Springs while GRFD battled the blaze left behind.

According to a GRFD spokesman at the time, the GRFD responded with 21 firefighters, two engines, and the tower engine to fight the fire. Due to the extreme heat, fire fighters were only able to surround the home in a defensive style attack to get it under control and help protect the homes and restaurant close by.

GRPD units were able to get the surrounding homes evacuated while the attack was under way.

Due to the circumstances of the fire, fire tactics took a lengthy amount of time. The crews battled the blaze for over two hours and were able to extinguish the blaze with little damage to any other structures.

Once the responders gave the all clear, all residents were able to return to their respective homes.

While investigators are still investigating the cause of the fire, it appeared that the home was heated with multiple propane-style heaters. The actual cause of the explosion is still under investigation.

The current condition of the resident was also unknown at the time of the GRFD press release, but the patient was life-flighted to a burn unit more suitable for the type of injuries that occurred.

A Skywest commercial passenger plane out of Denver, destined for Rock Springs, reportedly slid off the runway upon attempting to land, according to the Sheriff's office statement.

The cause and details remain under investigation by airport personnel and federal aviation authorities.

A total of 50 including passengers and crew were aboard the plane during the incident with no reported injuries.

The sheriff's office worked together with the airport, Rock Springs Police Department, Sweetwater County Emergency Management, and the City of Rock Springs Fire Department to transport passengers safely off of the plane.

Shortly before 5 p.m. the evening of December 23, Green River Fire Department was paged to a reported structure fire in Pioneer Park Trailer Court, according to a GRFD press release.

Upon arrival, Incident Command Captain J.P. Apostolope noticed smoke coming from underneath a mobile home. Engine 2 was the first truck on scene, led by Lieutenant Cody Rider and crew Cliff Walgren, Dallen Serrano, Chevy Eaton, Kenny Ball, and  Jason Bernal. They were followed by Engine 22. Two trucks and 14 fire fighters were on scene.

It was determined that the insulation under the mobile home was burning due to the attempt to thaw the main line using a propane heater. Due to the quick response of GRFD, the fire was quickly extinguished, causing damage only to the insulation and skirting. There was no damage to the interior of the trailer.

The GRFD expressed their thanks to thank the Green River Police Department, Castle Rock Ambulance, and Sweetwater Combined Communications for their assistance and response to the scene.

The GRFD also reminded all citizens that in extreme cold weather conditions when thawing frozen pipes everyone should follow four steps: turn on the faucet and keep it running; apply heat to the frozen area with a hair dryer, never using an open flame; continue to apply heat without stopping until full water pressure has been restored; and check all faucets and prevent pipes from freezing in the future by running water through the pipe, even a trickle, which helps prevent pipes from freezing.