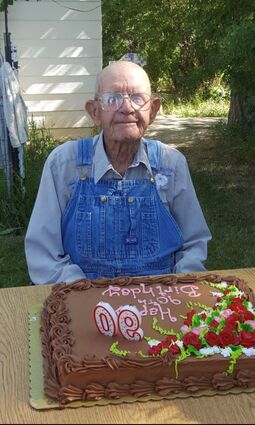 Gerald W. Stout, 95, passed away at Sage View Care Center in Rock Springs, Wyoming with his daughters at his side. He was a long-time resident of Farson, Wyoming coming from Nebraska with his family when he was just three years old.

Gerald was born July 23, 1927 in the Village of Hollinger, Nebraska. He always said I was born in Beaver City, Nebraska. His parents were William Z. (Zeb) Stout and Thelma Irene Fiscus.

He attended schools in Eden Valley until the tenth grade and was already working full time on the farm with his father. At the age of 17 he married Edith L. Williams, age 16 at her parents' home in Rock Springs, Wyoming. They were married for 75 years before her death in 2020.

Gerald was a self-employed Farmer; Rancher; Gold Miner; Trucker and Heavy Equipment Operator working around Eden Valley most of his life. He also worked in many other locations, including the South Pass and Atlantic City, Wyoming areas; Rock Springs; Pinedale; Evanston and some of the surrounding states. He was a member of the Sweetwater County School District #1 School Board; janitor at the Farson School; drove the school bus and was a "jack of all trades." A friend to all.

He enjoyed rock hunting and cutting; mining operations; running any type of equipment; talking about the History of Wyoming and the local area and inventing easier ways of doing just about anything. In general, he just enjoyed working. He was an avid hunter; fisherman and trapper in his earlier years.

Cremation will take place; a Graveside Service and Inurnment will be at a later date in the Eden Valley Cemetery.