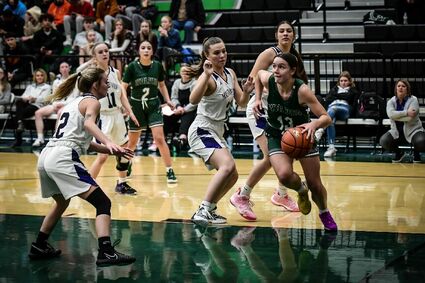 Ella Stanton takes off with the ball Thursday during the Flaming Gorge Classic game against Mountain View.

The Flaming Gorge Classic is one of the biggest tournaments of the year. Teams travel from around the state, and from Idaho and Utah, to compete. The teams were matched up well for great competition and the athletes had a fun-filled weekend of basketball.

On Thursday their first game against Pinedale got canceled.

"It was disappointing to miss the Pinedale game because I think we need court time with our girls," said Head Coach Rick Carroll.

Thursday evening, Green River played Mountain View. Brianna Strauss led the team with 12 points, along with Ella Stanton with six rebounds and Jayla Braden with two assists. The Lady Wolves had a lot less turnovers but learned that they had a few other things they needed to work on. The Wolves lost to Mountain View with a final score of 36-47.

"We need to get better at getting on the glass, rebounding better and boxing players out," explained Carroll. "We learned we need to communicate better as a team."

On Friday the Wolves played against Bear Lake, Idaho. Jayla Braden led the team with 22 points, with Ella Stanton having 12 rebounds and Jayla Braden with five assists. As a team they played better. They had seven three-point shots and they ended the game with a win, 59-39.

The last day of the tournament, Green River matched up against Lyman. Madison Moffat led the team with 10 points, while Addison Demaret had nine rebounds and Jayla Braden had two assists. They unfortunately missed too many of their shots and lost the game with a final score of 45-57.

"We are still struggling to make sure we know where our teammates are at and not helping on defense as much as we could," added Carroll. "Over the course of the weekend, we shot really poorly and we made some bad decisions on some of our shots, including the easy ones."

The Lady Wolves will be practicing hard to work on some of their struggles after the Christmas break.

Their next tournament, the Cheyenne Invite, will be on the east side of the state on January 5 through 7.