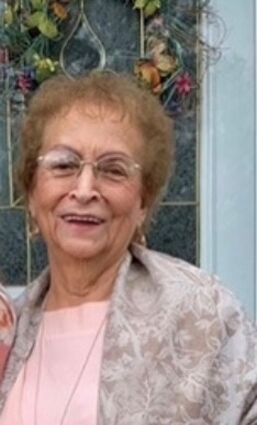 JoAnn Wyant, 87, passed away peacefully with her family by her side Monday, December 19, 2022 at home in Green River, Wyoming. She was a resident of Green River for 69 years and former resident of Rock Springs, Wyoming. Mrs. Wyant died following a year-long courageous battle.

She was born July 29, 1935 in Rock Springs, Wyoming; the daughter of John Pete Gold and Simonita Duran.

Mrs. Wyant attended schools in Rock Springs, Wyoming and was a 1952 graduate of Rock Springs High School. She attended Beauty College for one year in Salt Lake City, Utah and received her cosmetology license.

She married Gerald Frank Ruiz on October 9, 1957 in Rock Springs, Wyoming. They had three children from this union and later divorced. She married Paul Wyant on August 22, 1992 in Eden Valley, Wyoming and he preceded her in death on August 21, 2018.

Mrs. Wyant worked for Texas Gulf for twenty years in the Mine Department having retired in 1999.

She enjoyed spending time with her family especially her grandchildren; grandchildren's sports and cheering for them; Christmas; traveling and going up to her cabin.

A Rosary will be conducted at 10:00 A.M. Wednesday, December 21, 2022 at Immaculate Conception Catholic Church, 900 Hitching Post in Green River, Wyoming. A Mass of Christian Burial will be conducted immediately following the Rosary. Friends may call one hour prior to services at the church. Graveside Services and Interment will be in the Rock Springs Municipal Cemetery in Rock Springs, Wyoming.