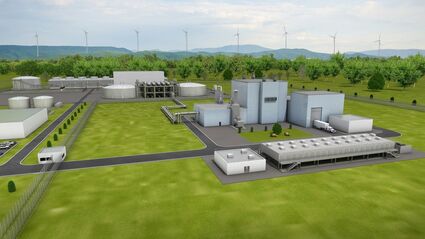 TerraPower's president and CEO Chris Levesque recently announced the Natrium demonstration plant project set to be built in Kemmerer will be delayed by at least two years.

"While the announcement of the TerraPower Natrium Reactor Project being delayed is unfortunate, Sweetwater County and Southwestern Wyoming is positioned very well at the present time with several large scale industrial projects currently in the works and future expansions on the line for the next several years," Economic Development Specialist Kayla McDonald said. "Sweetwater County should not be negatively impacted by the announcement. However it will give the opportunity for more preparation to develop future training for the workforce that will be needed and it will also identify additional needs to ensure the success of the project."

At the end of October, TerraPower and PacifiCorp also announced a plan to jointly study the feasibility of adding up to five additional commercial Natrium reactors by 2035. Despite the delay on the first reactor, the study will continue as planned, according to Levesque.

"The joint study will evaluate, among other things, the potential for advanced reactors to be located near current fossil-fueled generation sites, enabling PacifiCorp to repurpose existing generation and transmission assets for the benefit of its customers," the press release announcing the joint study explained. "The location of future Natrium plants will be thoroughly explored through this study process, and both companies will engage with local communities before any final sites are selected."

The main reason for the delay on the initial reactor is that TerraPower was relying on the use of High-Assay Low-Enriched Uranium (HALEU) from Russia for the first core load, "as the United States stood up its own HALEU production capabilities," Levesque explained. Russia's invasion of Ukraine in February caused the only commercial source of HALEU fuel to no longer be viable.

TerraPower, the Department of Energy (DOE), Congressional allies, and project stakeholders have been looking into alternative sourced for HALEU but have determined that at this point "domestic and allied HALEU manufacturing options will not reach commercial capacity in time to meet the proposed 2028 in-service date for the Natrium demonstration plant," according to Levesque.

After TerraPower's announcement, U.S. Senator John Barrasso (R-WY) released a statement criticizing the DOE for "slow-walking this process" and not listening to Congress.

In April 2022, Barrasso introduced the Fueling Our Nuclear Future Act of 2022, a bill designed to ensure a domestic supply of HALEU for advanced nuclear reactors.

"TerraPower's announcement underscores what I've been saying for years: America must reestablish itself as the global leader in nuclear energy," Barrasso said. "Instead of relying on our adversaries like Russia for uranium, the United States must produce its own supply of advanced nuclear fuel."

Barrasso also said he sent a letter to ENR Chairman Joe Manchin requesting an oversight hearing early next year to ensure that DOE is working aggressively to make HALEU available for our nation's first class of advanced reactors.

Despite the delay, plans for the Natrium reactor's construction will move forward.

"TerraPower remains fully committed to bringing the Natrium demonstration plant to Kemmerer, Wyoming," Levesque's statement said. "While there is much we can't control as it relates to fuel availability, what we can control is construction of the plant, licensing applications and engineering and design work; and TerraPower is moving full steam ahead on those fronts."

TerraPower will update the project's production schedule in the new year, but anticipates a minimum of a two-year delay in bringing the reactor into operation. In the meantime, the work on constructing the facility will continue as planned, and is expected to start in Spring 2023.

"We are still planning on a peak workforce of up to 2,000 workers in the mid-2020s and currently have over 800 engineers finalizing plant design and engineering," Levesque's statement said. "TerraPower raised over $830 million in private funding in 2022, and Congress has appropriated over $1.6 billion for the Natrium project. These funds will be used to ensure that the Natrium demonstration plant is completed."

While the delay will impact the Kemmerer community, it may actually be a largely positive impact.

"TerraPower will uphold its earlier commitment to maintain employment for current Naughton Power Plant workers who want to make the jump to nuclear, even during the years when neither plant is running, according to a company spokesperson," the Casper Star-Tribune reported. "And as long as those jobs survive the delay, the prospect of a couple of extra years before the reactor starts up might bring some needed relief to a community scrambling, with limited resources, to ready itself for the thousands of interim and then long-term residents expected to arrive in the next several years."

Kemmerer's City Administrator Brian Muir told the Casper Star-Tribune he believes the situations could have more positives than negatives, especially since having a "buffer" can be helpful for project management.