GRFD has been busy 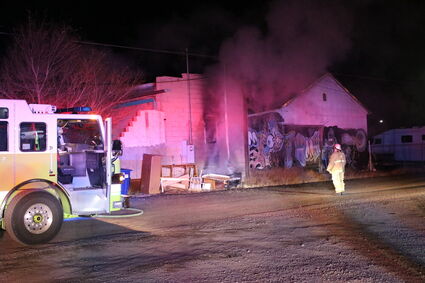 The GRFD responded to a fire at the Flaming Gorge Motel.

The Green River Fire Department, along with other first responders, law enforcement and EMS, have been keeping busy lately, responding to fires, accidents and rescues.

"Immediate action from the GRPD ensured all the tenants were alerted and were safely vacated from the burning structure," the GRFD press release explained.

GRFD responded with Engine 2, Engine 22, and Tower 2. Approximately 18 firefighters quickly extinguished the fire which was confined to the room of origin. The fire appears to have started from a heater/air conditioner unit shorting out. The fire spread to a mattress, burning up a wall and self-ventilating through the window. GRFD checked for extension and deemed the building safe. Castle Rock Ambulance was on scene to assist the GRFD.

"Thank you to GRFD, GRPD, Castle Rock Ambulance, and Sweetwater County Combined Communications for a great response and great save!" the press release said.

At approximately 2:59 p.m. Nov. 28 the GRFD was paged to an accident at mile marker 82 on Interstate 80 westbound. It was reported a pickup had lost control on icy roads and flipped and was lying upside down in the median. Upon arrival, the GRFD found that there were still occupants in the vehicle.

"The fire department would like to thank Chris, a gentleman that stopped to lend a helping hand to our firefighters to safely remove a toddler from the vehicle," the GRFD press release said.

The GRFD also reminded all drivers that the winter weather is in full swing and asked drivers to please slow down on roads during future storms this season.

At 5:08 p.m. Nov. 30, GRFD along with Castle Rock Ambulance were dispatched to a contractor that fell into a Joint Powers Plant pipe vault.

After a patient assessment from Castle Rock EMS, it was determined that the best and safest course of action was to set up the GRFD confined space rescue protocol, according to a GRFD press release.

The GRFD Technical Rope Rescue Team safely removed the patient. The patient was then hoisted out of the vault with minor injuries and transported to the Memorial Hospital of Sweetwater County.

"The GRFD has been very fortunate to have a very skilled technical rope and confined space entry team due to the fact that many of our firefighters are also members of mine surface teams and mine rescue teams, along with regular training with the fire department for such incidents," the GRFD said. "We would like to thank GRFD Technical Rope Rescue Team, Castle Rock Ambulance, Sweetwater Combined Communications, and Memorial Hospital of Sweetwater County for their assistance."

At 3:25 p.m. Dec. 4, GRPD officers responded with GRFD firefighters to a report of a fire inside of an apartment. It was reported to the GRPD that the power had gone out and as the tenant was resetting the breaker a fire started in the breaker box. The individual used a fire extinguisher to put the flames out and the fire department made sure the fire had been completely extinguished. 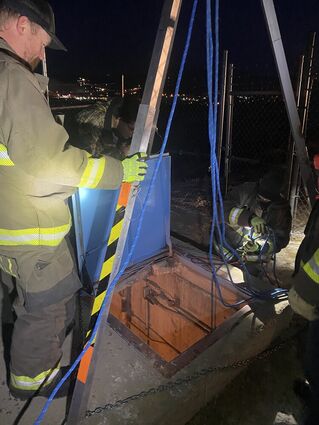 The GRFD helped rescue a contractor that fell into a Joint Powers Plant pipe vault.

In a change of pace, the Green River Fire Department held their annual awards banquet on Saturday, Dec. 3 at the Green River Pavilion. There were many accomplishments from the entire department with a total of 8,083 training hours and a possible 530 calls for the year, according to a press release.

Those recognized for years of service were Kyle Bohlmann with five years, Casey Kendall with 15 years, Austin Rider with 15 years, Glen Hunter with 20 years, and Bryan Carpenter with 25 years. Most responses went to Gerhart Spalding with 407 responses.  Most training hours went to Matthew Meadows with 557 hours. Officer of the Year went to Austin Rider.

"Congratulations and a big thank you to our GRFD family," the press release said.