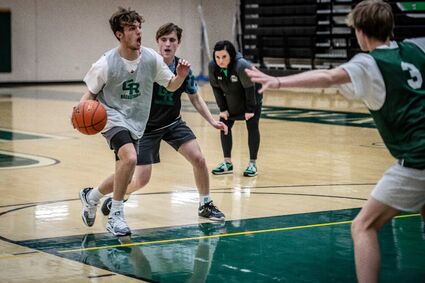 Caleb Lake rushes down the court during a practice on Tuesday.

Basketball season is finally here and the Green River Wolves Boys Basketball team and the whole coaching staff is beyond excited. This season's tryouts had a great turnout with 47 talented young men.

"It was fantastic to have such a full gym," explained Head Coach Laurie Ivey.

Monday, November 28 was their first official practice, and they have a team of high-energy, hard-working boys.

The boys are buckling down and really focusing on defense, rebounding, transitions, communication, and becoming great teammates. These specific skills will benefit the boys more than they know for the season.

This team is really excited about heading into this season.

"We have lots of players returning with varsity experience, and they are ready to compete!" said Coach Ivey.

This group of boys are very special for many reasons. They are a tight knit crew who love to play together.

"They are just as close on the court as they are off the court, and that is huge," expressed Coach Ivey. "This group of boys refuses to be outworked."

They believe in what they do. These boys represent their team, school, and their community in the best way possible.

The Wolves basketball team have a bright season a head of them!

Their first games of the season will be on December 8-10 at the Casper Invite. Their first home games will be during the Flaming Gorge Classic, December 15-17. Come support your Wolves Basketball team!