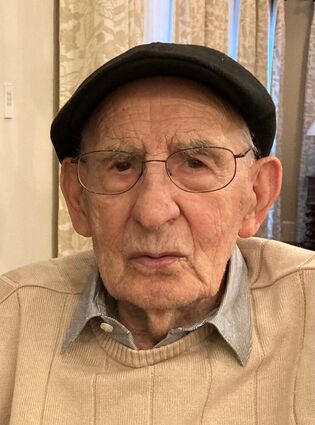 On November 15, 2022, Theodore (Ted) Coet died peacefully, surrounded by his loved ones. He was 96 years old. Ted lived a long and fulfilling life as a loving husband, father, grandfather, great-grandfather, great-great grandfather and friend. He was born in Ziegler, Illinois but lived a good part of his life in Rock Springs, Wyoming. He and his beloved wife, Elizabeth retired to their cabin in Pinedale, Wyoming which became a wonderful gathering place for their family for 40 years. He is survived by his son, Larry J. Coet, daughter, Cheri Schoolcraft, 6 grandchildren, 6 great grandchildren, and 1 great-great grandchild. He was preceded in death by his wife, Elizabeth Coet, and his parents, Theophile and Anna Coet.

Like Will Rogers, Ted "never met a man he didn't like." He was kind and generous to everyone he encountered. If you spent even a few minutes with him, you would become fast friends.

Ted's great passion was baseball. He played on the local Giovales team, a champion contender in 1960. He also coached his wife's softball league.

At the age of 17, Ted enlisted and served in the United States Navy during WWII as Seaman 1st Class, gun pointer on the SS Saginaw Bay, engaging in seven battles. He earned 6 stars and was awarded several medals of honor and received an Honorable Discharge.

A Mass of Christian Burial will be conducted at 10:00 A.M. Tuesday, December 6, 2022 at the Our Lady of Sorrows Catholic Church 116 Broadway Street, Rock Springs, Wyoming. Graveside Services and Interment will be in the Rock Springs Municipal Cemetery.

The family respectfully requests donations be made in Ted's memory to St. Jude's Hospital