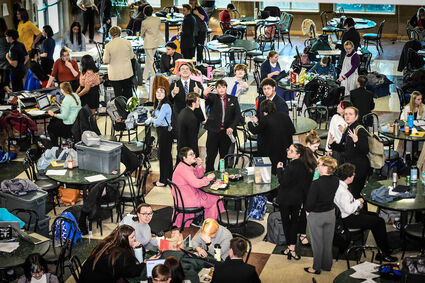 Students from across Wyoming fill Green River High School during the Speech and Debate tournament. Green River hosted the tournament last weekend. Cheyenne East took first place in the 4A division, Riverton won the 3A division, and Wyoming Indian won the 1A/2A division.

The high school was bustling last weekend. A group of freshmen was running around the school carrying radios with Dan Parson "barking orders" at them while they tabulated results, organized rounds, delivered ballots, helped judges, and generally ran Green River High School's speech and debate tournament.

This year, over a dozen schools from across Wyoming came to Green River to participate in the tournament, which was even bigger than last year. The event went well, according to Speech and Debate Coach Dan Parson, who has helped host 25 tournaments at the high school.