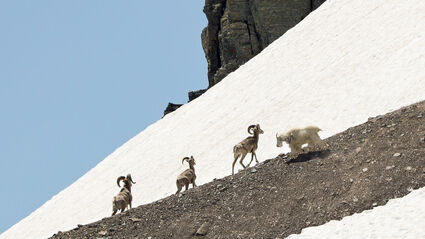 This photo shows a mountain goat that later dropped his head and actively displaced bighorn sheep at a high-elevation snow patch in Glacier National Park in Montana. Joel Berger, a wildlife researcher from Colorado State University, found that mountain goats displace bighorn sheep 95% of the time when there are salt licks involved. In the Tetons, wildlife managers have worked to rid the landscape of non-native goats to prevent competition with sheep.

JACKSON -It doesn't take much to get a mountain goat's goat.

One of Berger's recent studies found that in high alpine environments in the Rocky Mountains where mountain goats and bighorn sheep compete for resources, goats displace sheep - as much as 95% of the time when salt licks were the issue. Their aggressive behavior is part of the reason, Berger said.

"It's like somebody with a short fuse," he said. "They just hit the aggressive button."

Berger's study was conducted in three alpine areas: Marias Pass in Glacier National Park, Caw Ridge in west-central Alberta and around Mount Evan in Colorado. Research was not conducted in the Tetons, where wildlife managers have spent years trying to eradicate a non-native herd of mountain goats.

Berger said his study is relevant for wildlife officials trying to protect the isolated, native herd of Teton-dwelling sheep from disease and competition with non-native mountain goats.

"If we have scientific evidence that is solid and where the goal is to maintain bighorns, why would we allow exotic dominating mountain goats into the system?" Berger said.

In 2021, Grand Teton National Park officials completed an aerial cull, using helicopters to shoot 58 goats primarily in the northern part of the park. That followed two years of on-the-ground hunting with "skilled volunteers," a program that saw hunters take out 63 goats, and another round of aerial hunting in 2020 that saw 36 goats killed. That operation was the most controversial, leading to rebukes from Gov. Mark Gordon, the Wyoming Game and Fish Commission and Secretary of the Interior David Bernhardt, who wanted hunters to be given a chance to kill the goats.

The park's wildlife biologist, Sarah Dewey, declined to comment on Berger's study since it was not conducted in western Wyoming. Park officials said they didn't want to "speculate on its application to a completely different ecosystem." But they did say that mountain goats haven't been eradicated entirely in the Tetons.

"We know a handful of them still remain," park spokesman C.J. Adams said in an email.

Aly Courtemanch, a Jackson-area wildlife biologist with the Wyoming Game and Fish Department, was hesitant to comment, specifically, on the results of Berger's study for the same reasons as park biologists. But she did say that the results echo previous work that found similar patterns.

"On the surface," she said, Berger's paper appears to "lend further support" to that understanding.

Of the three sites Berger observed, only one is in an area where bighorn sheep compete with a non-native species of mountain goat: the Mount Evans site in Colorado, where goats and sheep sparred over salty areas. In Glacier National Park, where the rub was mineral licks, and the Alberta site, where the horned ungulates tussled over resting areas and forage, both bighorn sheep and mountain goats are native.

The sample sizes for Glacier were "really good," Berger said: over 100 observations of conflict between goats and sheep. In Alberta they were smaller: roughly 15. In Colorado they were the smallest: seven conflicts.

In about three-quarters of the conflicts, goats pushed bighorn sheep out of the area passively, by moving toward the sheep with a "calm, directed" walk, Berger said. In other conflicts, they got aggressive, charging the sheep or putting their head down and swaying their head and horns.

Twelve percent of the time, neither goats nor sheep reacted. But at the salt-lick sites in Colorado and Montana, goats won 95% of the time. Conflicts at the bedding and grazing patches in Alberta were a wash in the goats' favor, though sample sizes were lower.

And, while sample sizes differed across ecosystems, Berger said the results were largely consistent: "The patterns of goat domination, in all cases, whether introduced or exotic, were the same. Goats win."

Mountain goats do still live near Grand Teton National Park, most prominently in the Snake River Range south of Jackson Hole. Courtemanch said those goats are descendants of animals that Idaho wildlife officials introduced in the southeastern part of the Gem State in the 1960s and '70s: The same goats that are thought to have eventually migrated north into the Tetons, where they were removed over the past four years.

Now, Courtemanch said the risk of goats moving from the Snake River Range to the Tetons is minor. There's a decent distance between the two ranges and forested habitat that's difficult for goats to move through. Plus, Courtemanch said, Game and Fish collaring data doesn't show the goats venturing that far north.

"They're pretty much down by Alpine," Courtemanch said.

The Game and Fish biologist said the goats that eventually did colonize the Tetons are thought to have come from one or two one-time movements "where a few goats came wandering up here, decided they liked the Tetons, stayed and started reproducing."

But, Courtemanch said, that sort of movement is "infrequent."

To kill goats that live beyond park boundaries but still dwell in the Teton Range, which stretches into the Bridger-Teton National Forest, Game and Fish officials authorized huge goat hunts in the hunt area just outside the park. State wildlife officials issued 48 goat tags a year for the past few years in those areas, though the numbers of goats harvested dwindled as hunts in those numbers continued.

This year Game and Fish reduced the number of tags to four. The goal, Courtemanch said, is to give hunters the opportunity to shoot a goat that showed up in that area - though the likelihood is smaller now. That's likely going to be the strategy going forward in areas west and south of Grand Teton.

"If a goat moves out of the park into that open area, or say a new goat comes in from somewhere else entirely, a hunter can harvest it and help us keep those numbers down," she said.

The park, meanwhile, has not announced any other plans to remove mountain goats from its alpine regions. This winter, it does, however, plan to publicize a draft environmental assessment reviewing possible management strategies for keeping sheep and recreational skiers separate. Skiers can displace sheep from prime habitat. Using DNA scraped from poop, park biologists recently estimated that the park's bighorn herd is composed of roughly 178 animals, and they feel a population that small still merits concern.

Courtemanch said there are areas in Wyoming where wildlife officials want goats, including the Snake River Range and the Beartooth Mountains. But there are other places where they don't, like the Tetons.

Berger's study meanwhile shows what can happen when the wild goats and sheep overlap, for better or worse.

"Where the goal is to maintain sheep, then it's clear what the steps are," Berger said.