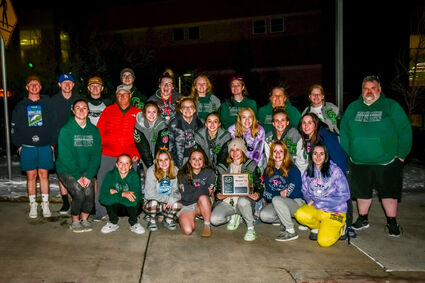 The Lady Wolves Swimming and Diving team smiles with their Runner-up award for taking second place at the 3A State Championships.

Going into the championships last Thursday, Green River was predicted to be the winners of this year's meet through a poll on WyoPrep's website: Green River 34.17% and Lander 27.5%.

Unfortunately the 200 Yard Medley Relay team got disqualified, which put the Lady Wolves in a difficult position entering into the meet with no points in their first event.

The ladies continued to show so much determination and battled to win as many events as they could.

Despite their dedication, it was a devastating loss for the Lady Wolves when they didn't bring home another state title. They lost to the Lander Tigers by 44 points.

The 400 Yard Freestyle Relay team won All-State Champion and set a new state record for the event with a time of 3:40.23. The swimmers were Tavia Arnell, Courtney Clark, Haley Clevenger and Tanith Smith.

It was a tough race in the 200 Yard Freestyle event. With close scores, Courtney Clark finished in fourth place and Haley Clevenger finished in fifth.

Green River had strong swimmers in the 500 Yard Freestyle event and had three swimmers finish in the top 12. Courtney Clark finished in second place, receiving an All-State award. Haley Clevenger finished in fourth place and Emilee Barnes finished in ninth.

Brianna Uhrig had an amazing finish in the 100 Yard Breaststroke, winning second place and receiving an All-State award. She also finished in fourth place in the 200 Yard Individual Medley.

Madison Moffat competed in the top 12 in the 100 Yard Butterfly event and came in eighth place. She dropped 1.43 seconds off her personal record.

Head Coach Colleen Seiloff told her team that she is so proud of them. She said they kept fighting and never gave up.

"You may have gotten second today but you are first in our books!" Seiloff told the team. 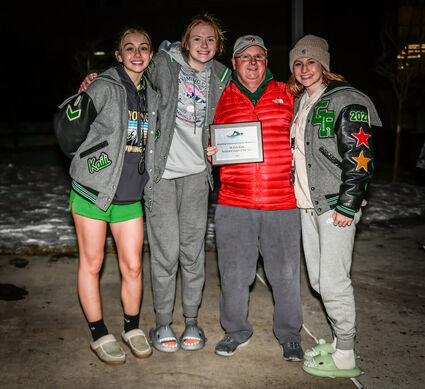 Rick Barker was awarded Assistant Coach of the year at the 3A State Championships. Pictured are Kaili Wadsworth, Olive Roberts, Rick Barker and Zella Maez.