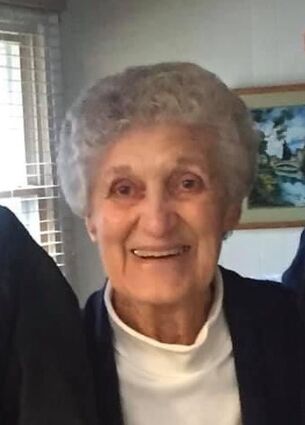 Margaret Johnson, aged 92, passed away at her home in Rock Springs on a Sunday afternoon, after an extended battle with congestive heart failure. She died peacefully in the presence of her immediate family.

Marge started her life in the coal mining camp of Lionkol, just North of Rock Springs, the daughter of Slovenian immigrants Ignatz Lovshe and Frances (Kuhelj) Lovshe. She graduated from Rock Springs High School with the class of 1947, before attending Denver University and the University of Wyoming, where she received her degree in Secretarial Sciences in 1953. In 1959, Marge married Wayne Johnson in East Moline, Illinois, but after short stints in Illinois, Oklahoma, and Colorado, they returned to Rock Springs.

During her life Marge was an avid Bridge player and was a 50-year member in PEO Chapter AE. For many years she attended the Wyoming Engineering Society yearly convention with Wayne where they made lifelong friends from all over Wyoming. More recently she was a fan of 'Wheel of Fortune' and 'Jeopardy', the only TV she watched. She was always kind to the young neighborhood children and was known to be an excellent cook of what is now called 'comfort food'. She always loved having food for friends and family around the kitchen table. Marge was a 20+ year Breast Cancer Survivor. At the time of her diagnosis, it was quite a scare, but she handled it well, and went on to a fulfilling life afterward.