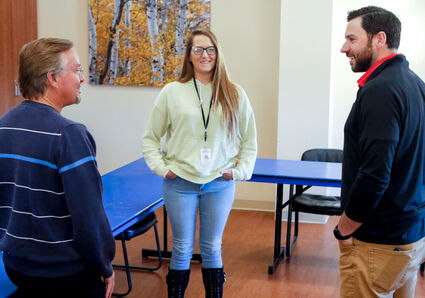 Jillian Zerkle (center) talks with Steve Humphries-Wadsworth (left) and Josh Spinney at the Cedar Mountain Center on Oct. 20. Zerkle serves as a unit coordinator for the facility, returning there after going through the program herself in 2019.

CODY -Around the Cedar Mountain Center, Jillian Zerkle is known as the kind of person who "opens doors, both literally and metaphorically," said Steve Humphries-Wadsworth.

Zerkle has only worked at the facility since January, but immediately endeared herself to staff and residents, said Humphries-Wadsworth, the service line director of the center.

As a unit coordinator for the facility, Zerkle connects with residents, and makes sure they feel supported and stay mindful during one of the most difficult battles of their lives: an ongoing fight with mental health challenges and substance abuse...