Actors' Mission to host "Day of the Dead" fundraising gala 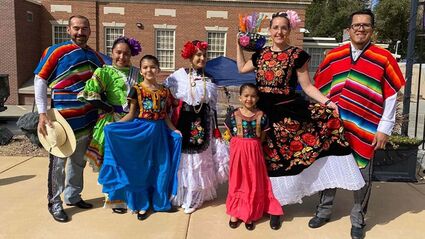 The Danza, Corazon, Cultura Mexican folk dancers from Green River will be featured at the Dia de los Muertos gala.

In celebration of their 20 years in existence, the Actors' Mission is celebrating with a "Dia De Los Muertos," or "Day of the Dead," gala event Saturday, October 29, at the Holiday Inn Ballroom.

Each year, the Actors' Mission Executive Producers have selected a popular theme for their annual fundraiser. Past events included Mardi Gras and Carnivale Di Venezia. This year, the theme is the Day of the Dead, which is a holiday that traces its earliest roots to the Aztec people in what is now central Mexico.

"This is going to be a really unique and vastly entertaining celebration this year, raising money to renovate our building into a black box theater right in the heart of downtown Rock Springs," Barbara Smith, a member of the Executive Producers, said.

In Dia de los Muertos celebrations, people wear skull masks and build altars to honor the dead and invite spirits to share in the community celebrations with music and dance, food and drink.

"We have some really interesting displays prepared for this gala event," Smith said. "We will have an antique altar which Brad Russell has repaired to include in the Ofrenda, honoring several friends and relatives of Actors' Mission."

The gala will also include a performance by the local folk dance group "Danza, Corazon, Cultura," lead by accomplished dancer Rosaura Barrera.

"Our desire is to share our enthusiasm for the beauty and complexity of many different genres of Mexican folk dances and their specialized dancing steps called 'zapateado,'" Barrera said.

Other activities and events throughout the evening include games of chance, such as the popular Diamond Dig.

Skeletons will abound as volunteers will be available for face painting or temporary tattoos. There will be a Tienda, or small store, filled with unique hand-made items featuring the Day of the Dead, as well as a puppet show display, built by Dave Gutierrez, featuring skeletons dressed in Shakespearean costumes.

Contributors have donated items for several raffles and a silent auction.

"There are so many supporters of the Actors' Mission fundraising efforts in our community who have donated wonderful items for our Silent Auction," Norma Prevedel, Executive Producer, said.

Football fans might be interested in the raffle for two tickets to see the Raiders vs Chargers live at the Allegiant Stadium December 4 in Las Vegas. These tickets are available in advance at the URA, The Rock Springs Chamber, and Sweetwater Trophies in Green River. The winning ticket will be drawn at the event.

There will also be a grand prize raffle as a surprise feature at the event.