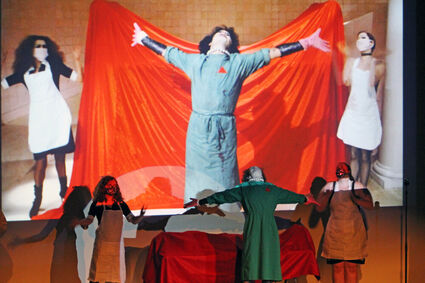 "Don't dream it, be it," Frank-N-Furter sings in "The Rocky Horror Picture Show."

Kenny Starling took this advice to heart when they decided to start their own drag theater group, The Starling Company.

"Rocky Horror" is not only a show close to Starling's heart, but will be the premier production of the company.

Starling directed and starred as Frank-N-Furter in last year's Actors' Mission production of the musical, which was the fifth time they had been involved with the show. To make it six, Starling is again directing and will be reprising their role as Frank. Joining Starling is a full cast, ready to bring the cult classic story to life in a unique way.

The Starling Company's production of "The Rocky Horror Picture Show" will be a shadowcast performance, meaning the 1975 film will be shown, projected onto a large screen behind the stage, and as the film plays a full cast of actors will act out the story along with the characters on-screen. The performance will also involve audience participation.

Doing a shadowcast performance is new to many of the cast members, who have not only never been in one but never even seen one. This includes Devin Manfull playing Brad, Kaley Sikora playing Magenta and Dejanae Westbrook playing one of the Transylvanians.

"Trying to recreate what's on screen is very different from interpreting and making your own character," Sikora said, explaining the cast members have to essentially memorize the entire film.

Westbrook added it also includes trying to mimic everything in the film in detail, even when you can't watch it.

While the shadowcast format presents challenges, it also has benefits. Manfull said it's an easier format for him than a traditional play because you don't have to memorize as much since your lines are essentially fed to you by the film and you just have to lip sync.

Manfull played Brad in last year's production of "Rocky Horror" with the Actors' Mission as well, and worked as the stage director at the same time. This time, he's happy to be able to focus more on his character.

"Growing through a character has helped me grow as a person," Manfull said.

The other actors have also found opportunities to learn and grow by being involved with the show.

"I think a lot of the show is a lot about just being yourself and being able to express creativity and freedom," Sikora said. "If you look into the deeper meaning, on the outside, it kind of just looks like they're a bunch of crazy people, but they all really embrace who they are. And I hope that's something that people really pull out of the show, because I think that's what Rocky Horror is all about."

Embracing who you are, and using theater to do so, is a large part of why Starling decided to start their own company.

Starling has been doing theater for a little over a decade and said "I don't know where I would be right now" if they hadn't gotten involved in theater at an early age, going along with their mom when she volunteered to help with shows.

"It gave me an outlet and escape," Starling said of theater.

After moving to Wyoming, Starling was still looking for an outlet within the theater community, but feeling like they couldn't find one. While they spent some time involved with the Actors' Mission and support local theater groups like Horizon Theater, Starling feels that both of these groups have their own unique niches, which aren't exactly what they're looking for.

Starling also enjoys performing as a drag queen under the name "Starling, My Darling." While organizations like "Drag for a Cause" do exist in Sweetwater County, they only perform a few times a year, and Starling would like to see a bigger drag scene exist in the community.

"I think that theater should be a fun place," Starling said. "It should be a space for people to escape their real lives and the drama of the world and just have a good time. And I want to bring that aspect to Rock Springs and the theater community with drag, something we don't really have."

Wanting these types of outlets and opportunities, Starling decided to be the one to create them, and "The Starling Company" was born.

Starling believes a large section of the community is both supportive of and eager to see more unique types of theater, including drag.

"The people in this town and our surrounding areas, they're here for it," Starling said. "They love things that are different. They're just not given an opportunity to experience it."

While feeling the support of the community, Starling is also always aware of the possibility of pushback. Growing up as a "gay queer kid in the south," Starling said they learned to stay alert and "hyper-aware," both of whether they are safe and of aggressions directed toward others.

After first announcing the company, Starling was already prepared to deal with pushback, and had a plan for how to react. 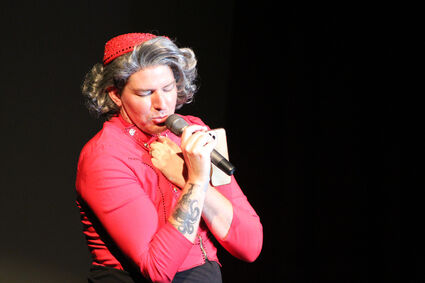 Tara Lipsyncki, the Emcee and Usherette, demonstrates how the audience can "clutch their pearls" if they don't want the cast members to interact directly with them during the "Rocky Horror" shadowcast.

The opportunity to respond this way came in September, when Rock Springs resident Greg Stalks wrote an email to the Rock Springs City Council with complaints about the Starling Company. Starling and over two dozen supporters attended the Sept. 20 city council meeting to listen and respond to Stalks.

"At the end of the day, it's just ignorance and fear that it's based on," Starling said of bigotry in general. "I'd encourage people to hang around because you're gonna get to experience queer joy in action, and that can be a beautiful thing if you give yourself an opportunity to experience it."

The Starling Company's first production, "The Rocky Horror Picture Show," will be performed at the Broadway Theater in Rock Springs at 8 p.m. and midnight October 21 and 22. Tickets are $20 for general admission and $35 for "Squirt Zone" floor seating, which includes an audience participation kit and raffle entry.