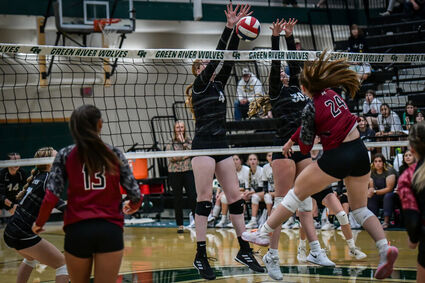 Middle hitter Eva Murray blocks the ball at the net during the game in Green River against Riverton.

The Green River Wolves volleyball team had two home games against Riverton and Cody over the weekend. Unfortunately, they lost the games but had great fight through them both.

In the first and second match against the Riverton Wolverines, the girls had a rough start but slowly turned it around with some great defense. They had great digs in the back row, and up at the net they had Eva Murray reading the net like a pro and blocking some dangerous attacks. Some small mistakes made them lose their rhythm, but they never gave up on the match.

In the third match against Riverton the girls had a great comeback. To start off they had Brinley Nelson with an amazing kill, and Oaklee Hanks had great defense up at the net with two solid blocks in a row. The third match overall had great drive and dedication. The coach had also put in a couple underclassmen to hopefully help the varsity team get out of their weird funk: Haidyn Terry as setter and Rylee Rosas as outside hitter. These girls did such an amazing job and definitely did their jobs right. With their hard work, they helped the Lady Wolves win the third match.

Sadly, in the fourth match they lost their momentum and couldn't pull out a second win. Even though this game didn't go as planned, the girls never gave up on each other. It was a tough loss, but these girls have the drive to take this and use it for their next game. And that's exactly what they did.

On Saturday, the Lady Wolves faced the tough Cody Fillies. They came out super strong with high intensity and great movement. They were working hard and even had a long lasting rally that they unfortunately lost. 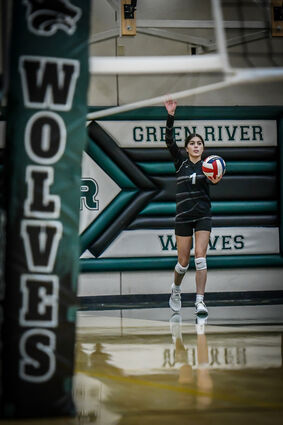 Riley Rosas serves the ball during the game in Green River.

In the second match against Cody, they were playing great defense and were picking up some aggressive attacks in the back row. Mia Rosas and Abigail Fuss played their parts to the fullest and kept those rallies going with their amazing defense. In the last match, the girls were playing very well together. They were staying on their toes, following the ball and not giving up on any of the plays. The girls were definitely working as a team during the Cody game but just getting unlucky. This young varsity team has such high potential if they keep working hard and stay dedicated.

The Lady Wolves are hosting a home game today at 6 p.m. against the Evanston Red Devils. They will travel to Jackson on Saturday to play against the Jackson Hole Broncs at 1 p.m.