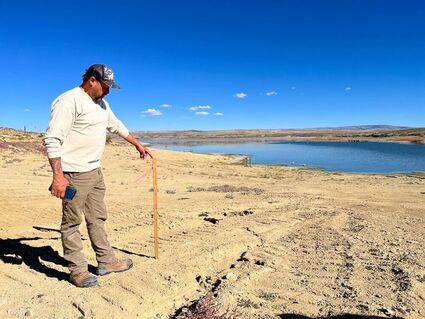 Buckboard Marina owner Tony Valdez stands next to a stake that indicates the extent of lowering water levels at Flaming Gorge Reservoir Sept. 26, 2022.

FLAMING GORGE RESERVOIR-The shoreline of this large reservoir on the Wyoming-Utah border has steadily receded this summer as the Bureau of Reclamation pumped more water out to help maintain critical water levels 500 miles away at Lake Powell.

The water shrunk from boat ramps and forced marinas to scoot docks ever inward. By September, 6 feet of vertical drop in the water level translated into vast areas of exposed lakebed, leaving many boat ramps on the northern reaches of the reservoir high and dry. All told, the reservoir's elevation is about 12 feet lower today than two years ago, according to the U.S. Geological Survey. Thousands of acres that had been underwater for 58 years now comprise a rainbow of boggy sediment, grasses and invasive plants.

Buckboard Marina owner Tony Valdez and his staff scrambled all summer to keep boat docks in the water, but they couldn't always keep up. Two large floating docks near a drop-off sank so low that their access ramps became too steep to safely walk. Toxic cyanobacterial blooms have also migrated further down the lake.

"I can't take my grandkids or my dogs to the water," Valdez said, motioning to big green globs and sheets of muck as he stood on a boat dock. "We're losing our marina. It will be gone after next year."

When Valdez bought the marina in 2019, he immediately began making renovations. It was a solid investment, he believed, for a popular service at the largest recreational draw in southwest Wyoming.

The BOR had maintained seasonably stable water levels at Flaming Gorge since 1964 when the dam was completed. Businesses in Wyoming and Utah built an economy around the fishermen, boaters, bird-watchers and others drawn to the massive impoundment.

Things began to change, however. Valdez first noticed that vehicles and boat trailers with plates from California, Arizona and other southwestern states became increasingly prevalent at the marina, he said, as reservoirs along the Colorado River began drying up.

More than 20 years of drought - intensified by human-caused climate change - have pushed the Colorado River Basin and the 40 million people who depend on it into a water crisis. The system's two largest reservoirs, Powell and Lake Mead, sank below 30% capacity this summer - the lowest levels since they were constructed. If the situation worsens, Powell and Mead could reach "deadpool" status at which the reservoirs would no longer release water downstream into the Colorado River.

The crisis is traveling upstream to places like Flaming Gorge, where it has implications for everything from riparian ecosystems to economic livelihoods. Currently, Flaming Gorge is at about 74% storage capacity, according to the U.S. Geological Survey. Whether the reservoir shrinks further depends on whether the BOR will continue to tap Flaming Gorge and how quickly it might be naturally replenished.

In a legal sense, Flaming Gorge Reservoir, which is fed by headwaters in western Wyoming, was created for a moment like this. Its primary purpose, according to federal officials and Colorado River Compact scholars, is to serve as a backup water bank to help maintain the Colorado River system. Specifically, Flaming Gorge and a handful of other reservoirs in the upper Colorado River Basin states of Wyoming, Colorado, Utah and New Mexico are key to ensuring a minimum flow of 7.5 million acre-feet of water at Lees Ferry just downstream of Powell on a running 10-year average.

So far, the upper basin states have met the threshold. Nonetheless, when Powell and Mead saw drastic lows in 2021, the BOR drew an extra 125,000 acre-feet of water from Flaming Gorge. This past spring when the situation in the lower basin states became even more dire, the BOR initiated a draw of an additional 500,000 acre-feet, estimating a 15-foot vertical drop in the reservoir over the water season ending in April 2023.

The Drought Response Operations Agreement, signed by Colorado River Compact stakeholders in 2019, authorizes the BOR to make those, and possibly additional emergency draws from Flaming Gorge, to help maintain critical water levels and hydropower generation at Powell and Mead. If this summer is any indication, continual draws from the reservoir might drastically alter an aquatic ecosystem and fishery that local businesses have relied on for decades.

"This has been held at a premium, high-water mark, recreational lake for [58] years," Valedz said. "Why wasn't this addressed 15 years ago if we knew this was coming?"

The BOR is expected to decide whether to implement another "extra" draw from Flaming Gorge in April 2023.

Kokanee salmon and trophy-sized lake trout draw tens of thousands of visitors to Flaming Gorge each year, supporting a recreational economy in southwest Wyoming and northeast Utah. But as the lake is drawn down, water recedes from shallow shorelines and fish are forced into a smaller space, essentially shrinking the fishery toward the dam side of the reservoir.

Fishing guides and Wyoming Game and Fish have cooperated to maintain an appropriate balance to the predator-prey relationship between lake trout and kokanee, according to Recon Angling owner Shane DuBois. Now, the decreasing water levels threaten to drastically alter that balance and may require shifting management strategies.

Kokanee spawning beds have been exposed, which will force the fish to spawn in areas covered in silt, reducing the reproduction success rate, according to Wyoming Game and Fish Regional Fisheries Supervisor Robert Keith. If Flaming Gorge's normal water levels are restored, the episode will likely improve traditional spawning beds, Keith said. However, if BOR withdrawals from Flaming Gorge substantially outpace natural inflows for several more years, the fishery will suffer.

"That's going to be an economic impact to communities around the reservoir that depend on the anglers showing up," Keith said. "And If we don't have any ramps in Wyoming that anglers can launch from, then they're all going to launch further down the reservoir and those dollars are going to be spent down in Utah."

The BOR is in consultation with the Wyoming State Engineer's office and local recreation and fishery managers regarding drawdowns at Flaming Gorge. The Flaming Gorge National Recreation Area - managed by the U.S. Forest Service - as well as Wyoming Game and Fish, can apply for federal funds set aside to aid in the Colorado River Basin water crisis. But maintaining critical water levels at Powell and Mead remains a priority, while projects involving reconstructing boat ramps and shifting fishery management would take years.

For DuBois, who depends on both a healthy fishery at Flaming Gorge and functional boat ramps, the situation threatens his livelihood. He recently invested tens of thousands of dollars in a new fishing boat and hopes it pays off.

"How does the Bureau of Reclamation not know [the recent drawdown] would leave most boat ramps unusable?" DuBois asked.

As he continues to relocate and reconstruct boat docks to adjust to lower water levels, Valdez is considering how to expand his scope of clientele to make up for losses.

"I didn't buy this place to come up here and watch this go to shit," Valdez said.