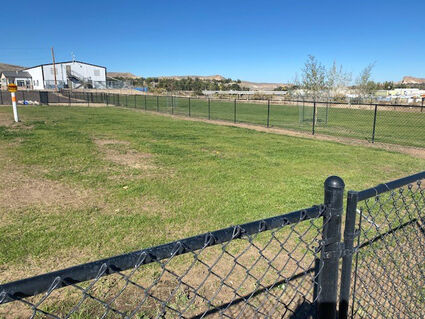 Construction continues on the new dog park located by the horse corrals in Green River.

Citizens in Green River have been asking about the dog park opening since the fence was erected and grass planted late this summer. Officials hope to have the park opened next spring or early summer.

Brad Raney, Parks and Recreation Director says the new seeded lawn has come in well but still needs more time. A further round of seeding will most likely be needed in the spring to fill in some of the bare spots. Purchasing sod for the park would have used up nearly all of the funds raised by the National Honor Society students. While grass seed takes time and patience it has allowed the raised funds to go further.

Parks staff will build the crushed asphalt pathway walking path around the perimeter this fall and look to build dog play features to install in the park in the spring. The dog watering feature and dog waste station has just arrived and will be installed prior to opening.

Greenbelt Task Force Chairman John Freeman says we should remember the Dog Park is a community project. As a City public works project, it would have cost over $200,000. Instead, GRHS National Honor Society students saw a need and raised $38,000 for supplies. It took years, but the students went through the zoning process and were able to enlist companies to join the cause.

In addition to the high school students, Inberg-Miller donated the engineering; Searle Brothers Construction completed the dirt work as in-kind donation; Green River City crews installed the sprinkler system and provided a parking lot and planted the grass and trees and will install the amenities for dogs and their owners; The Greenbelt Task Force hired contractors & bought supplies at a reduced cost.

The wait will ensure everything is set up right for everyone, especially our four-legged friends.

If anyone is interested in volunteering or donating to the project please contact John Freeman, Chairman of the Green River Greenbelt Task Force at 307-871-0064.