Mine rescue team competes at Internationals 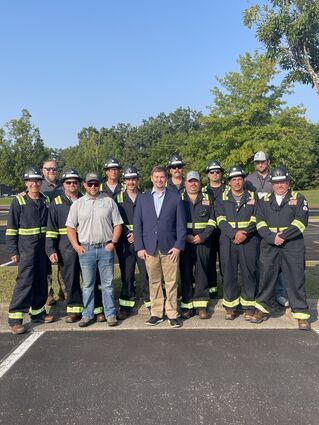 The miners moved forward together slowly, finding their way through smoke so thick they could barely see their own hands in front of their faces. The team members felt the heat and heard the roar of a fire in front of them as they pulled 400-pound fire hoses forward to extinguish the blaze. Wearing full apparatus gear, each miner ran 100 feet with 50-pound jugs in each hand before hitting an eight-by-eight log four feet with a 10-pound sledgehammer and cutting a six-by-six log in half with a bow-saw.

These are just some of the situations the Genesis Alkali Blue Mine Rescue team found themselves in last week when they competed in the 2022 International Mines Rescue Competition in West Virginia. The team of local miners went up against 22 other teams representing eight different countries, competing in five different events.

Despite it being their first time at the international competition, the Genesis Blue team came away with a first place win in the mine rescue skills challenge event.

The International Mine Rescues Competition is a biennial event in which mine rescue teams from around the world gather to test underground emergency response. The competition has been hosted by countries including Poland, China, Australia, Ukraine, Canada and Russia.

This year the competition was hosted by the United States and facilitated by the Mine Safety and Health Administrarion (MSHA), taking place at the National Mine Health and Safety Academy in Beaver, West Virginia.

The mine rescue team from Genesis spent a little over a week in West Virginia for the competition. They left Friday, Sept. 9, spent Saturday and Sunday training, had an opening ceremony Monday, competed over the next three days, and celebrated at the awards ceremony Friday night. The team returned home in the early hours of Sunday morning - then got back to work as normal on Monday.

"It was an amazing experience," Cole Randall, the team trainer, said.

The Genesis Blue team was invited to compete in the International competition after taking first place overall in the National Mine Rescue Competition in August. With about three weeks to get ready, the team had to prepare for an entirely new competition experience.

"The international contest isn't like normal contests, at least for us," Randall said.

He explained not only does the International contest use slightly different rules and operate under a different setup than local competitions and the national competition, but the events teams compete in have differences as well.

Some events, including the mine rescue skills challenge, were completely new for the team.

The biggest difference in the International competition, however, was the level of realism.

"Compared to the National contest, the International is a lot more realistic, and, I believe, more of training than a contest," Randall explained. "We came back with a lot more knowledge."

During the first aid competition, instead of having volunteer actors with a little bit of makeup and pretend injuries, the team had high-tech moulage simulation mannequins provided by the West Virginia School of Osteopathic Medicine.

"They did everything," Randall said of the mannequins. "They blinked, they talked, they groaned, they moaned, they could even urinate, they had blood. They're as close as you can get to real life."

For the mine rescue simulation competition, which is similar to what the team does for "field" competitions locally and at nationals, instead of having a mock field set up with rope mazes and signs, they have an entire building set up to simulate a mine.

The building was pitch-black and filled with real smoke, to the point the judges had to use thermal cameras to observe the competition, according to Randall. The building also had real mine equipment the teams had to examine.

For the firefighting event, a real fire was set inside a burn tunnel.

"We weren't putting out a little trash can with a fire extinguisher, we were using fire hoses to put out a large fire," Randall explained.

The skills challenge, which was totally new for the Genesis team, included a relay event. The team came straight from solving a field problem without a break and one by one had to go through a series of physical challenges, such as running with weights, sawing through logs, unrolling fire hoses, and more. Each team member had to complete the whole challenge, including the older guys on the team like 61-year-old Team Captain Robert Pope, according to Randall.

"They'd push through, group together as a team and cheer each other on through each," Randall said.

Facing more realistic scenarios both provided hands-on training and allowed the Genesis team to put their skills to the test.

While many of the aspects of the International Competition were new for the team, they stepped up to the plate and performed well.

"They looked like they'd done it before," Randall said. "Knowing that it was their first time, it was amazing to watch."

In addition to taking on the challenges of the competition itself, the Genesis Blue team was also going up against professional mine rescue teams. Many of the teams who compete in the International competition train for mine rescue full-time as their only job.

"It's intimidating," Randall said. "To be able to compete against guys that that's their job, and outperform them, is a pretty amazing accomplishment."

For Genesis, every team member has a different full-time job within the mine, and mine rescue training and studying often happens on their own personal time. Randall said the team is especially thankful for all the family members, including wives and children, who sacrifice and support the team members as they better themselves. The hard work from the members and the support of their loved ones paid off during the competition.

"To go into there and win first place in one of the events, it's pretty amazing," Randall said. "I think it shows heart. You can practice all you want, but you have to have heart, determination, and dedication to do that."

While the team members were nervous for their first time competing in the international competition and they didn't want to go out and embarrass themselves or take last place, they also focused on staying positive and viewing the competition as a learning experience, according to Randall. And, despite their nerves, they still came home with a first place win.

"It was pretty cool, like a goosebump feeling, to watch [the team members'] faces when they heard our name called, and to feel the support from people back home," Randall said. "It felt good to get that recognition and know that we earned it."

With the win, Genesis Blue continues to demonstrate the ability of local mines and mine rescue teams.

"We wanted to be able to represent Wyoming, and Genesis, and the Green River/Rock Springs area, and I believe we did that with our results," Randall said. "I know that we gave it our all."

While being a part of competitions is exciting, Randall knows his team is training for emergency situations, and he's more confident than ever in their ability to respond if anything happens.

"This [competition] puts you as close as you can get to being in that situation and letting you know if this is for you or if it's not," Randall said, explaining some people think they can do mine rescue until they're faced with real circumstances. He believes this competition helped prove how capable Genesis Blue would be in an emergency. "Our team did well. Everybody reacted calmly and communicated smoothly. No fears." 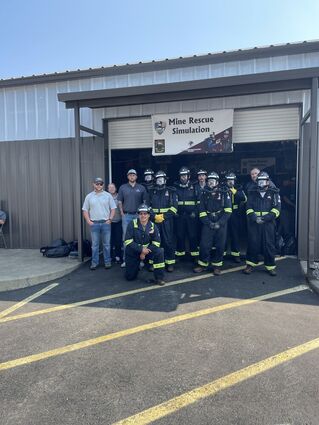 The Genesis Blue team took first place in the Mine Rescue Skills Challenge during the International Competition.

As the team made their way through smoke and darkness, Randall saw their ability to work together through scary circumstances to do what needs to be done.

"You have to trust your team and communicate that you're together and you're going to get through it," Randall said. "They bonded well as a team and really relied on each other. That was a huge thing."

Randall also hopes the mine rescue team will never be needed, but knows they'll be ready to respond if they are.

"We all joined to be there in a time of emergency," he said. "When a disaster happens underground, we don't get to call firefighters in, we don't get to call paramedics in - none of them can go underground. So, they're relying on us. So we try and train ourselves to be those people in case something like that happens, to be prepared. I hope that we never have to use that skill, but I'm fairly confident. If there was a disaster, Genesis Alkali is the team I would call."