Students get cooking in new facility 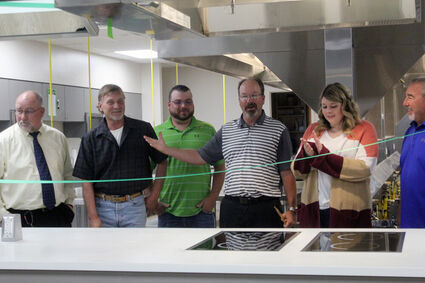 As Green River High School students get cooking this semester, they are doing so in a brand new culinary arts room. The high school hosted a ribbon cutting ceremony to celebrate the new facility last week.

"It's amazing and I'm happy that it got done," Marisa DeClercq, the Culinary Arts teacher at GRHS, said about the new room. She added it's shocking to remember what the room was and see what it is now.

The discussion about updating the culinary facilities at the high school began early last fall, according to Sweetwater County School District No. 2 superintendent Craig Barringer. At that time, GRHS's principal Darren Heslep and DeClercq went to Rawlins together and toured the new culinary arts facilities there. Seeing the updated facilities gave them an idea of what they would like to do at GRHS, DeClercq explained. They put together a blueprint, and DeClercq drew what she wanted - a dream plan that ended up being very close to the room that eventually became a reality.

After discussions, meetings with engineers and contractors, budget meetings, and more planning, the idea was brought to the Facilities Committee and the school district's Board of Trustees.

"We jumped on it," Steve Core, who is on both the Facilities Committee and the Board of Trustees, said about the project. "We thought it was a good idea and a good program."

The plans changed slightly over time as the board haggled over the price, unwilling to pay for the initial, more expensive cost estimate, Core explained. Thankfully the funding came from major maintenance funds the school receives from the state of Wyoming each year. The Board of Trustees thought the culinary arts room was a good use of funds and an important investment for the students, Core said.

Eventually the cost was cut down and agreed upon, Groathouse Construction was selected for the project, and the work began.

"They had a really tight timeframe," Barringer said about the contractors who did the construction. "They had from May to the start of school to get this whole project done."

Despite the limited time, the project did get done. Core noted most of the work that needed to be done can't even be seen now, since it's under the floor or inside the ceiling. The room itself holds shiny new stoves, counters, sinks, refrigerators, food racks and more.

"As most of you older people remember we used to have Home Ec back in high school and Home Ec wasn't anything like this," Core said during the ribbon cutting. "It's come a long way."

"We had been talking about transitioning our program from home cooking to more of a commercial cooking," Barringer explained after the ceremony. He said the high school has been shifting its focus to helping kids prepare for both college and career paths. A future goal is to work with Western Wyoming Community College to be able to offer credit for classes like culinary arts.

DeClercq explained another reason for the shift to commercial culinary arts classes is because of the funding the school receives. Much of the funding, including the yearly Perkins grant, is designated for CTE (career, tech, and education) classes, which focus on developing kids for going into the workforce.

"Hopefully we'll find kids that find their passion in this, and if they do, we'll help get them ready for their next steps," Barringer said. "There's a lot of jobs in the hospitality world and this just gives them a small taste of it in a pretty controlled environment."

The culinary arts classes DeClercq is currently teaching and plans to teach in the future include not only culinary classes but also classes in things like hospitality and restaurant management, focusing on all aspects of working in the hospitality industry, not just cooking.

Core and DeClercq both expressed the hope the new culinary arts facilities will help prepare students who can go into hospitality positions locally and help keep Green River's restaurants running.

"There's discussion that some restaurants in Green River are going to close because they don't have cooks," Core pointed out. "And gosh, we don't want that."

"We are lacking [hospitality] industry jobs in this community," DeClercq agreed after the ribbon cutting, adding the culinary arts program can help bring local kids into the industry. "It gives them a step up. They've been in a kitchen before, they've done safety and sanitation, they've done things that restaurant owners are looking for."

Roughly 145 GRHS students have already started to get this step up this semester alone, with DeClercq teaching six classes with about 24 students each. These students have already been taking advantage of the new facility to start learning and cooking. The hope is that the program will only continue to grow.

"We know there's a need and we have a lot of interest," Barringer said.