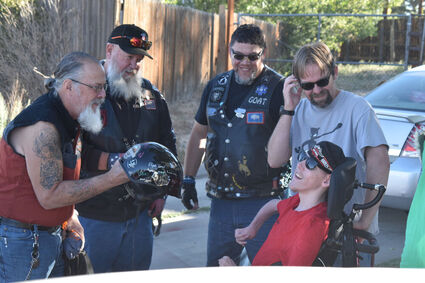 Before Vincent Johnson’s ride, Jay Weisgerber, a biker from Alliance, Nebraska, presents him with an autographed helmet donated by Flaming Gorge Harley Davidson.

Motorcyclists from all over joined together to give Rock Springs resident Vincent Johnson, an 18-year-old with cerebral palsy, a ride that he will never forget.

For several years, it was Johnson’s dream to go on a motorcycle ride.

In order to make that dream happen, though, he needed to ride in a sidecar. His grandmother Susan Nay began reaching out, making calls and posting on Facebook in search of one so her grandson can fulfill his dream.

In May, she got in touch with Jay Weisgerber, a man from Al...