Horizon Theater presents "The Importance of Being Earnest" 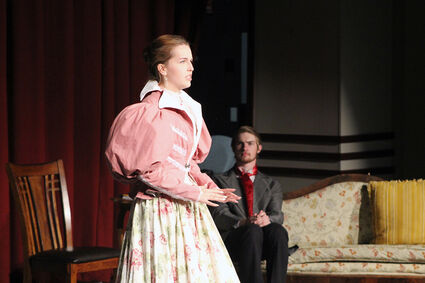 A night of lies, betrayal and romance is coming to the Broadway Theater this weekend with The Horizon Theater's production of "The Importance of Being Earnest."

The Horizon Theater, a new theater company in Sweetwater County, premiered with a musical showcase, but this production will be their first full play, which Sarah Schaeperkoetter said has been exciting.

Sarah and her husband Cory are the founders of The Horizon Theater, and Sarah will be directing "The Importance of Being Earnest."

They chose this show for their first play for several reasons, including the fact that it's a classic and a fun story.

"I was just laughing the entire time," Sarah said, remembering seeing a production of the show in Utah. "It's just a feel-good comedy."

"'The Importance of Being Earnest' is probably one of the more well-known public domain shows," Cory said, explaining it was originally written in the 1800s. "It's still kept its title for almost 200 years now."

The fact that the play is public domain, meaning it is not subject to copyright, allows more flexibility with the way the play is performed.

"The actors get to have a lot more freedom with how they play the characters and their lines and everything," Sarah explained.

Another advantage of the show is the size of the cast. Eight actors will be playing nine characters, with an even split of four female actors and four male actors.

"It's a fairly small cast, which is nice to work with because you get to be a lot more intimate with them and a lot more personal with your directing, which I appreciate," Sarah explained.

The cast size also helped for this production, since exactly eight actors showed up to audition.

"It worked out well because I think everyone fits their characters very nicely," Sarah said. "I don't feel like anyone is out of place in the roles that they're placed in. And each character is very distinctly different and so is each actor, and it works really well because I'm able to see some of their own personalities in the characters. I'm able to see them grow as actors and with their characters as well. So it worked out very, very nicely with the casting of it all."

Cory agreed having a smaller cast can help create a better environment than trying to work with 20 to 30 different actors in a bigger production.

"We are planning on doing some bigger shows with a lot of actors, but for our first show as we're figuring things out we definitely want to try and stick to smaller casts and smaller sets and stuff as we're learning and growing with all this," Sarah added.

As they've worked on putting their first show together, Sarah and Cory have come across a number of different challenges.

For Sarah, it's her first time directing on her own, which she said has been a learning experience. She's had to work on not trying to control everything and instead to create a foundation for the actors and then let them build off of it.

Another challenge has come with the set and location. While they love working with the Broadway Theater, Sarah and Cory said it can be challenging because they are sharing the space with other performers. They also don't have their own space for building sets or putting together props and costumes, so finding all the pieces for the show was another challenge that required the help of others. The Western Wyoming Community College Theater Department stepped in to help, lending props and costumes for the period piece.

Another challenge from doing a period piece is the need for the actors to speak in an accent and use proper dictation. This show uses what is known in theater as the RP, or "refined pronunciation," accent, which is an older, more proper British accent. Cory explained this accent is used in lots of different productions, which provides the actors with a useful skill.

"It's a very good accent to know so I'm glad that they had the opportunity to learn it," Sarah agreed, explaining helping actors gain new skills is part of what The Horizon Theater wants to accomplish. "We want to give them the experience and give them that learning opportunity to grow their skills and talents."

Cory explained they want to do shows that are "welcoming for the community," giving anyone a chance to be involved or just to enjoy watching.

For The Horizon Theater's next show, they'll need even more help from the community getting involved. Sarah and Cory's plan is to do "A Christmas Carol" for the Christmas season, which will require a large cast with roles of various sizes for people of any age.

"We're choosing shows where anyone from the community is welcome to be part of," Cory said.

Sarah added people can get involved in any way they want, from acting to helping backstage to being an usher. Cory said if someone just wants to paint a backdrop and not do anything else, they can do that. Either way, everyone is important and there's something for everyone to do.

"It is one of the largest team efforts you could ever be a part of," he said. 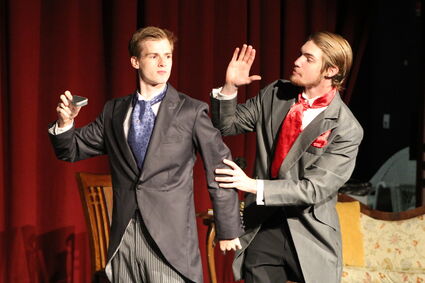 John Worthing (played by Cade Maynard, right) tries to get his cigarette case back from his friend Algernon Moncrieff (played by Elijah Kropf, left).

Sarah also said they want to have room for people with any experience level, from those who've never been involved with theater to those who've done countless shows.

"When it comes down to what we can offer the community, it's anything they can offer us," Cory said.

For this weekend, The Horizon Theater is offering the community a chance to watch a classic play and enjoy a fun night out.

"If you just want a night of just laughter and just fun, it's a great show to do that," Sarah said. "You just come and you just laugh."

"It's a classic slapstick comedy while we all figure out, what actually is the importance of being earnest?" Cory said.

The Horizon Theater will perform "The Importance of Being Earnest" at 7:30 p.m. Sept. 1-3 at the Broadway Theater in Rock Springs, with a matinee performance at 2 p.m. Sept. 3.