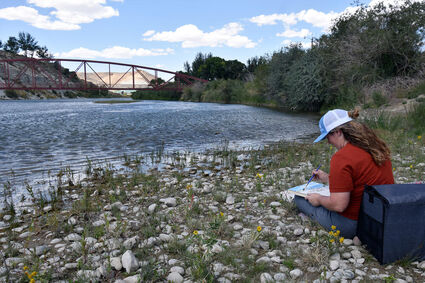 As the morning sun lit up the Palisades and the Green River last Saturday, 11 artists found a spot along the Green Belt and set up their canvases, ready to capture the beauty in front of them. Within a few hours, despite the changing light and a sudden windstorm, 11 brand new pieces of art depicting the Green River landscape were created.

"For our first year, I think we did pretty well," Debora Soule said. "And there are some strong paintings . . . some strong artists that have come out."

"Both the Green River Arts Council . . . and I were kind of on the same wavelength thinking that we should start a plein air event," Soule, the director of the CFAC, said. "Because of resources we talked and said let's pool our resources so we can have an event."

While the competition has been in the works for quite some time, it almost didn't happen this year. Finding an open day based on other community events and events around the state was challenging. Because of difficulties with scheduling, the plein air competition and the annual Art on the Green and Battle on the Green competitions ended up happening on consecutive weekends. This wasn't originally the plan, but was necessary in order to make sure the event actually happened.

"We didn't want another year to pass," Soule said.

For some of the artists, however, the back-to-back nature of the two art events worked in their favor and was an exciting challenge and way to connect to other artists.

"That was an amazing experience, meeting all these people," Swonger said.

Andrew Kneeland, a local painter with a studio in Downtown Rock Springs, also participated in both competitions over the past two weekends. While Kneeland has competed in art competitions across the state, he had never been part of Art on the Green until this year, and he was also one of the first painters to be part of the inaugural plein air competition. Kneeland also stressed the importance of the connections made during both events.

"Those two [competitions] feel like they go hand in hand as far as what the memory will be in my mind because of just the community of artists that you're around, and that is probably my favorite thing about this competition," Kneeland said. "The paintings are fun, the competition is fun, but I love getting together with other artists. That's the best part."

As far as the actual painting goes, one of the main differences between Art on the Green and the plein air competition, according to Kneeland, is the subject matter. During Art on the Green, artists can paint whatever they want, and all bring their own ideas and experiences. For the plein air competition, however, everyone has the same basic starting point.

"Different individuals are going to be expressing the same thing in different ways," Kneeland explained. "We're all looking at kind of similar landscapes. . . It's starting off at the same place and then branching out from there, which is really cool."

Kneeland and Swonger also enjoyed the challenge of painting in a limited period of time during both competitions, and described the difficulties that came with extra elements to painting outdoors during the en plein air competition.

"The challenge really came when the sun was beating hard, and so I moved," Swonger explained. "But later on a windstorm kept blowing away my stuff and blew my painting over. I think the biggest challenge though is that light is always moving, the sun is always moving. A plein air event like this is a real challenge. . . So you have to paint fast."

Kneeland also described the challenge of the shifting light, as well as extra challenges like trying to use acrylic paint, which dries more quickly, especially outdoors. Despite the difficulties, however, Kneeland said it was a beautiful day and the perfect day for the competition, and painting the Green River landscape was a new and unique challenge for him.

"I'm a firm believer that we live in one of the most beautiful places in America," Kneeland said. "And I love that we are having these events where we celebrate what's here and the landscape that we've been given. We have got such a unique niche beauty right here. It makes me so excited to always be expressing that and sharing that with other people and encouraging one another that this is worthwhile, this is worth representing in art, this landscape." 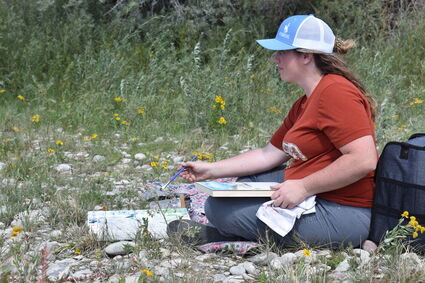 Amanda Romero decided to do a second painting during the Plein Air Competition.

Soule agrees that Sweetwater County is full of beautiful places, which is why she hopes the plein air competition will become an annual event, moving to and highlighting different spots around the county each year. Soule also hopes the event will continue to attract more artists each year, both those with experience and those who just want to give it a try.