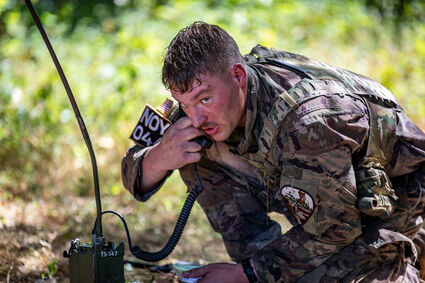 Sgt. Tyler Holloway of the 115 Field Artillery Brigade in the Wyoming Army National Guard calls in a Medical Evacuation as part of a round-robin set of events at the Volunteer Training Site in Milan, Tenn., July 26, 2022. Fourteen Army National Guard competitors across the U.S. came to Tennessee to compete in the 2022 All-Guard National Best Warrior Competition held July 22-29, 2022.

Sgt. Tyler Holloway, a fire support specialist with the 115th Field Artillery Brigade in the Wyoming Army National Guard, was named top Non-Commissioned Officer of the Year in the Army National Guard. He earned this distinction by winning the 2022 All-Guard Best Warrior Competition held July 22-29 in Tennessee.

Sgt. Spencer Fayles, a combat medic with the 144th Area Support Medical Co. in the Utah Army National Guard, was named top Soldier of the Year for the competition.

The announcement came on July 29, 2022, in Nashville at the Old Hickory Country Club. Fourteen competitors and dozens of...